Whenever there is a big sporting event or milestone at my house, it always involves food, and a menu is often planned weeks in advance.

The whole house is involved with the decision-making, and whenever the topic of a big meal is planned, the kids will often say they want homemade macaroni and cheese. It's not the simplest meal I make, but it is always met with smiles. It's hard sometimes to get teenagers happy about stuff in the house, but as soon as I start making, you can see a change in the energy in the house.

I grew up eating boxed mac and cheese, and although I'm not sure if it had any cheese in it, it was always comforting. When I got a little bit older, it was also very cheap and filling, which is a win-win situation.

As I got a little older, I started to eat more and more "real" versions of the dish, and although some were very good, I wanted to put my take on the dish.

I did a lot of research on recipes and found by trial and error that have put together mac and cheese I am very proud of and only lasts about 15 minutes at home before it is gone, and the kids are lying on the floor in a coma because they have overeaten.

While I find cooking a great pastime, I am horrible with any "roux" based dish, so I decided to go in a different route with baked mac and cheese. I do not do it often because it is a bit pricey, but the result is at least what my house thinks is a cheesy masterpiece.

I start by getting out a gigantic mixing bowl that would probably be better served for baking, but it works wonders.

My first step is to cook the macaroni, and I always make sure it is extra "al dente" because it will finish baking in the oven. I also fry half a package of bacon which gets the house starting to smell divine.

I then combine a little carton of heavy cream, about a cup of milk, pepper, garlic powder, and a couple of eggs and mix it up. I don't add salt because I put enough in when I'm boiling the noodles, and I figure some of the cheeses will add the extra amount. I often see cooking shows where they keep adding salt, but I think it can dominate a dish, so I'm careful about it.

I then start adding the cheeses, and this is where I am not fooling around.

I start with about a half bag of extra sharp cheddar, a half bag of mozzarella, and about a half-block of chopped-up Velveeta. I'm well aware Velveeta has about as much cheese as a boxed version, but it melts so well. I'd never eat a slice of Velveeta, but it can work wonders for a dish.

I add my macaroni to my big mixing bowl and then transfer it into a vast buttered baking dish.

I will throw it in the oven at 350 for about 20 minutes and will take it out.

I give it a quick mix, and if the cheese is really starting to melt, I mix in the rest of the processed cheese product, mozzarella, and chopped-up bacon.

I put half the rest of the cheddar on top, and if I'm feeling a bit ambitious will add crushed Goldfish crackers to the top of that layer. 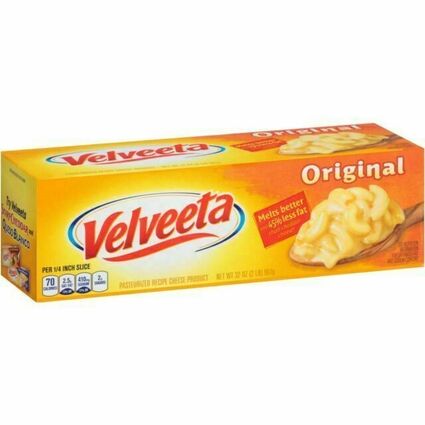 Velveeta is a must for the Mac and Jack.

I throw my dish back in the oven and give it around another 20 minutes to finish the job. The cooking time will vary based on the oven I'm using, but when the top layer starts to bubble, know it is time.

As soon as I get it out of the oven, the kitchen starts to get packed, and I swear there have been times the kids have been drooling.

I sometimes will have a side dish, but that never really gets eaten. I guess you could call the dish, "Mac and Jack".

I'm getting hungry now. I might need to spend half of my savings on cheese and get a batch in the oven.