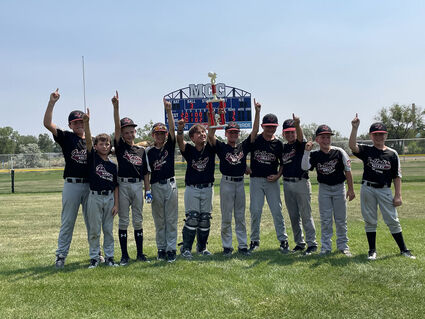 Ten boys from Manhattan, Amsterdam, Three Forks, Townsend, and Whitehall seized the opportunity and are now headed to Eugene, Oregon on July 21 for the Cal Ripkin Pacific Northwest Regional Championships. The winner in Eugene goes to the league World Series in Florida.

"This is a once-in-a-lifetime opportunity," said Zak TeSoro, the head coach. Because of this, the team is working feverishly over the next couple weeks to raise enough money to cover travel costs for their players.

Getting to this point was a season-long battle. After placing 2nd to the Belgrade Bandits in the two previous tournaments, the Gallatin Valley 10U boys came to Miles City ready to win.

They started the weekend with yet another intense battle against the Bandits. After five back-and-forth innings, Hudson Johnson (Manhattan) took the mound with the bases loaded and no outs in the 6th inning. He kept Belgrade from scoring with the help of his defense, getting two runners out at home, and striking out a batter. Gallatin Valley ultimately won 9-7 in two extra innings, ending the game on a line-drive catch by Carsten Donnelly (Three Forks) that he threw to first baseman Jack Douma (Manhattan) for the double play.

In the second round they beat Glascow with a decisive 12-2 victory. "They were a great group of small-town kids," said assistant coach Jeremy Johnson. "They fought hard."

Before the third-round game against Big Muddy, TeSoro told his team that Big Muddy was going to come out and take the momentum, but they were going to steal it back. That is exactly what happened.

"They jumped out 7-1, but then we came back and scored 13 runs the next inning," TeSoro said. Tommy Edwards (Whitehall) went four for four batting with three singles and a double. Big Muddy continued to make Gallatin Valley work for the win, scoring 16 runs to Gallatin Valley's 19. But Wyatt Tebay (Whitehall) took the mound in the 6th and shut them down.

On Sunday at noon ten incredibly determined Gallatin Valley boys showed up ready to play Belgrade, who had earned their spot in the championship game by working their way through the bracket after their loss on Friday.

Donnelly started on the mound and set the tone for the game, allowing only two runs. "He was smiling and having fun," said TeSoro. "And it kept through the game."

Tyzer Rains (Townsend) took the mound in the 3rd and was strong and consistent before Douma (Manhattan) came in for the last two innings.

Douma pitched a brilliant finish, allowing only one hit, no runs, and striking out five batters. Jack TeSoro had a near miraculous catch at 2nd, preventing a run and moving the momentum GV's way. At bat, Johnson, TeSoro, and Douma all made it on base before Donnelly batted in the go ahead run, followed by Luke Meissner's (Amsterdam) RBI, taking a 2-point lead they refused to give up.

"One of the big things we did when we played Belgrade before was struck out nine times," TeSoro said. "We told them that we need to really battle and grind at the plate, and we only struck out three times." Gallatin Valley handed Belgrade nine strikeouts that last game.

TeSoro said that each time Gallatin Valley lost to Belgrade previously, they just didn't quite dig deep enough. But in the end they figured out how to do it. "Their character really showed up," he said. "They got the one they needed."

"Every single kid did their job," said Kandy Johnson, who also kept the team book. "It was a team win."

Assistant coach Brent Donnelly agrees with her. "I feel like this win was a culmination of the entire season," he said. "They had to go through the whole process of winning and losing and being in different situations. In the end that is what made them come out on top."

That commitment is showing itself in many ways. Two team members, Garrett Evans (Three Forks) and Devin Pavlik (Manhattan), also participate in 4-H and have market animals they were planning to sell at the Gallatin County Fair on the Friday of the regional tournament. Both boys made the choice to go to Eugene rather than sell their animals at fair.

"I can be with my team and finish," said Pavlik who has three older siblings who are heavily involved in 4-H.

Evans also has his reasons for making that choice. "That's pretty cool for my first year of baseball," he said. 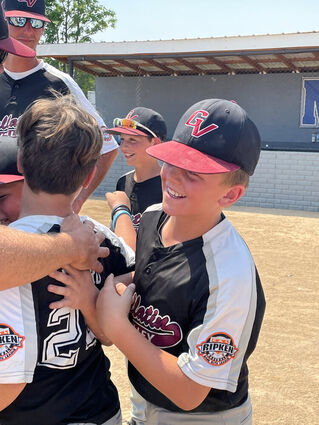 Carsten Donnelly and Hudson Johnson celebrate with Jack TeSoro after their hard-earned win.

The Gallatin Valley program as a whole had a strong season. They fielded six teams this year (up from four last year and three in the previous season). In addition to the 10U championship, the 12U team placed 2nd while the 11U and 13U teams both placed 3rd.

The 10U team will be on a fire truck in the Three Forks Rodeo Dayz parade. Look for them around town and at the rodeo doing some fundraising. Gallatin Valley Baseball will also be hosting a community barbeque fundraiser on Monday, July 19, from 6-8pm at Magris Field in Three Forks. Come down, buy a plate, and visit with the team. You can also donate via their GoFundMe page. They will keep everyone up to date through Facebook on the Gallatin Valley All Stars and Three Forks Baseball pages.

These ten boys are living a dream they likely did not even know was actually possible. And what are they looking forward to most? "Playing on the cool baseball field," said Hudson Johnson with a giant smile.