Petition aims to put a halt to rest area 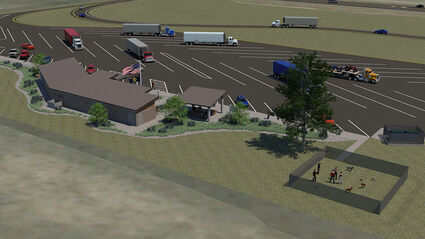 Pictured is an artist rendering of the planned Headwaters Rest Area. Courtesy of MDT

Residents, law enforcement officials, and emergency personnel raised concerns last week at an open house for the Montana Department of Transportation's relocation of the state rest area in Bozeman to land off U.S. 287 in Three Forks. An online petition has also been created by residents in the vicinity of what has been named the Headwaters Rest Area.

The petition's creator, Amy Weidinger is asking Montana Governor Greg Gianforte to override the project that the State Transportation committee approved in April.

"We are deeply concerned for our community, safety, environment, and the location of the proposed rest area. We are outraged at the lack of public notice and comment. The Montana Department of Transportation, in partnership with the City of Bozeman, made a deal to move the Bozeman Rest Area to Three Forks, Montana without a public hearing, public involvement, and local approval," Weidinger said.

Numerous other Three Forks residents voiced their concerns when signing the digital petition located at http://chng.it/4Rgzsrpt7k.

Elizabeth Barton wrote the relocation of the Bozeman Rest Stop and tripling its size is an irresponsible proposal.

"The Bozeman rest stop is a known crime problem. Its new location will be one-half mile from residential subdivisions. Our Sheriff's Department is opposed to this project. We were given no notice while Bozeman Community Leaders and an out-of-state developer were given the power to shape the future of Three Forks taxpayers. Please cancel this project for the safety and security of our families," Barton said.

Butch Barton has various reasons for his opposition to the Headwaters Rest Area.

"Safety, security, and traffic are just the start of the reasons this project needs to be stopped. Homeless shelter, drugs, and sex trafficking are a few more. The list goes on. Not only is it not needed in Three Forks, it is not needed anywhere in this area. Put it out in the middle of nowhere it will be of value to the traveling public. This is a project that only benefits the developer and costs the community with an increased need for infrastructure that will be paid for by local taxpayers. Take your 'Crime Stop' somewhere else. We don't want it in our community," Butch said.

Joe Barber has problems with what he described as not receiving public notification in public disclosure for the project's approval.

"It was done during normal workdays when people were at work and cannot attend, and it was also done during the height of the Covid pandemic," Barber said. "There is no need for this rest area given for municipalities within 30 miles with 24-hour facilities. The developer is making money on this project yet providing nothing to ease traffic congestion.  As a former law enforcement official, Barber also has safety issues.

"With 33 years of law-enforcement experience, I have found that rest areas are a magnet for illegal activity, narcotics and prostitution activity, and provide no benefit to the public in the community at large", he said.

The online petition has over 700 signatures as of press time, and organizers have also been gaining in person signatures.

"I don't like it being here, and I'd rather see it go somewhere else," he said.

Among the concerns for Meehan is the facility being used as a campground by those who will be visiting the planned Bridger Brewery facility that will include an amphitheater.

"Is everyone going to go park their camper here and then go to party at Bridger? Is that a possibility? Yes. Has it been addressed? I don't think so. There are a lot of things happening here, and nobody has even talked to me or asked my opinion. They basically said here is where it is. It's a little bit frustrating. I think whether we agree or disagree, it's still coming, and nobody has had a conversation with us about putting another issue on this end of the county."

Barbara Mutter, a board member for the Three Forks Volunteer Ambulance Service, is worried about keeping up with emergency services on the southern end of Broadwater County.

"We need help. How are we going to cover all of this? You deserve to have medical coverage, that is my job, but we are behind the eight-ball already trying to cover all the growth we are experiencing," she said.

The design-build project provides a property exchange for the current Montana Rest Area at 19th Avenue in Bozeman. The appraised value of the site is $3,818.888. The RFQ for the project stated in addition to procuring new property to relocate the existing rest area, the successful firm was required to design and construct a new single-unit rest area facility along and adjacent to I-90.

According to the MDT, the new rest area must be located at an existing I-90 interchange between the current site and the Milligan Canyon Interchange at MP 267. The new facility is not allowed to be east of Bozeman, and MDT will not accept a location in Belgrade or Bozeman.

Prior to the vote in April, MDT Engineers Kevin Christensen and Jake Goettle discussed the project.

Christensen said when they built the current rest area in Bozeman, there was not much except the rest area and interchange, but that area has grown tremendously and is currently developed and congested. He said the City of Bozeman began to indicate to them the location of the rest area was undesirable, and the congestion was causing them some concern.

Christensen said the MDT agreed with the city about it not being an ideal place to house a rest area, but it wasn't a priority.

After being put in contact with a developer, Christensen said they learned of the "interesting concept" that would provide the MDT with a new rest area in exchange for the existing property, and they began to explore what he described as a "real innovative process."

In an April interview, Marty Matsen, Community Development Director for the City of Bozeman, said they did not initiate the project, but after being approached by a private developer, they have written letters of support for the project. Matsen said they feel the project could be great for commercial development in Bozeman.

Transportation Commission member Shane Sanders said at the April meeting that because it was up to the contractors where this project would be located, there was no way to seek public comment beforehand. He said once people became aware of it, there has been several comments of concern, specifically from those in Broadwater County, where it will be located.

Also in attendance at the open house was MDT Alternative Contracting Section Supervisor John Pavsek, who said the project started four or five years ago with the City of Bozeman becoming interested in moving the rest area.

Pavsek said as development continued to occur in Bozeman, what was already a small facility became very busy, and they were also approached by three private parties who said they would give the state a new rest area if they did a land swap.

"MDT cannot by state law do a straight-up land swap. It has to be a competitive process which is an innovative method using the design-build," he said.

In charge of design builds for the MDT, Pavsek reported they had used this concept on 48 different projects, but what makes this one different is they allowed the design/build team to come up with the site and ended up with two different proposals.

And because state law requires a financial element to a design-build project, he said the developer chosen committed to reimburse the state roughly 1.2 million for the ability to develop the project. Pavsek estimated the cost of building this facility would be $5 to $7 million. 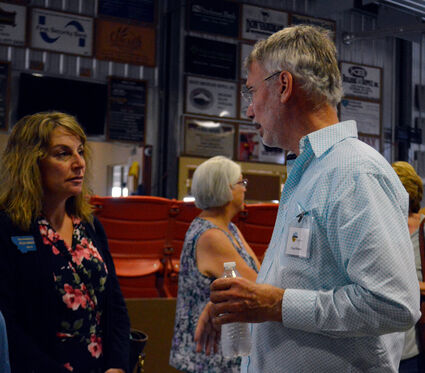 According to the Belgrade News, project developer Craig Rickert first proposed a swap with MDT in 2016.

Rickert said last week there were difficulties with the way the Bozeman project was originally designed, and he went through 13 different sites to try and find someplace else and ended up with the location in Three Forks.

Rickert added the location meets the federal mandates about the frequency of rest stops, offers more parking, and as far as safety -- it will be the most advanced MDT location in the state. He said they would have license plate reading cameras in both the entrances and exits.

According to the MDT, groundbreaking is scheduled for late summer or early fall.

More information about the project can be found at https://mdt.mt.gov/pubinvolve/headwatersrestarea/