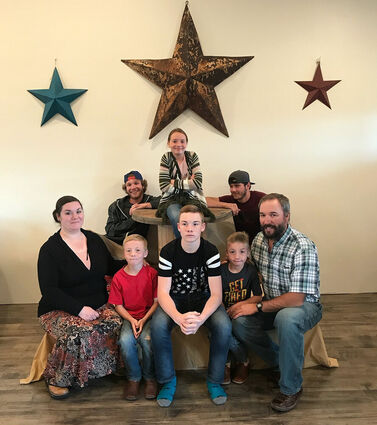 Pictured is the Roberts family of Three Forks. A fundraiser for Ted Roberts is scheduled for August 28.

Editor’s Note: A special fundraising event is scheduled August 28 to benefit Three Forks resident Ted Roberts. The fundraiser will begin at 1 p.m. at 354 Countryside Lane in Belgrade. The event will include food, music, and both a live and silent auction. Roberts was diagnosed in 2020 with Glioblastoma Multiform, one of the most aggressive human cancers.

Ted Roberts is a local contractor, husband, father and friend. He works for Battle Ridge Builders and is known throughout the contracting and building world for his strict attention to detail, warm friendly character and hard work ethic. His workmanship and kindness have built him a reputation in the trade, and one cannot go too far without meeting a fellow contractor who has had the privilege of working with Ted and speaks very highly of him.

Cody and Kari Ham, owners of Battle Ridge Builders, speak of Ted with gratitude and admiration for his years as an outstanding employee and fellow contractor. He has left a trail of fine craftsmanship wherever he has gone. Just last week, an old friend of his from his old town of Rigby was sharing with pride the fact he owns an old log bed that Ted built.

Ted has dedicated time and service to the Boy Scouts of America program. His older sons recount fond memories of rafting trips and 4-Wheeler outings with Ted they shared as he served in Scouts. Ted continues to teach and inspire the future men of tomorrow by dedicating time each week to teach Sunday school to young boys.

Five years ago, after commuting to work with Battle Ridge Builders and finally moving his family to Montana from Idaho, Ted and Nicolett began a new adventure, building their dream home in Three Forks. Together, Ted and Nicolett made sacrifices to see their dream come true and to build a home for their family. For months, they crowded into a little camper to live while they waited for the spring sunshine to warm the ground enough to begin excavation for their new home. Ted continued to work for Battle Ridge while building their family home. The six children watched and learned and worked alongside Ted and Nicolett, receiving an education few ever gain but many desire.

They continue to pass on the work ethic to their younger four children at home- as they guide and support them in 4H, Civil Air Patrol and home education. Ted and Nicolett are active in the community, local neighborhood homeowner's association and church service.

At Thanksgiving last year, he began to experience debilitating headaches, nausea and vomiting. After losing 15 pounds he was finally persuaded to get a scan.

What they saw changed their lives.

A golf ball sized tumor at the heart of his brain. The doctors said they could take it out-- no worries. He could be back to work in a month. But he wasn't. Ted survived the surgery but almost didn't make it home from the hospital. Finally, weeks later than anticipated, and a young boys birthday missed, Ted and Nicolett made it home to their children, hopeful the worst was over. But it wasn't. Then came the dreaded diagnoses, Glioblastoma Multiform, one of the most aggressive human cancers. Known for its unrelenting grip on its victims, no regard for age or dream ahead or marches on. Once again, Ted got back up and continued on, living life to its fullest, taking the challenges head on, unsure of what tomorrow brings but hopeful each day that there will be many more adventures ahead.

Ted lives his life with a tenacity and precision that few ever attain. His lifelong passion for mountain biking began before he could even walk. He was riding a bike before his young legs could carry him. His expert ability to fine tune any bike is a gift he shares with all around. Earlier this summer, despite feeling the effects of the battle he faced with cancer, he stood by helping the handful of young riders at the pump track at the Copper City Bike park. He quickly gained the trust and respect of each of the young children who began to turn to him whenever they needed a quick, expert repair- including the boy who took a nosedive after a jump when his tire fell off mid-air. When the kids needed a wise friend that day, they turned to Ted. Last summer, Ted and his younger boys took a bike trip to Jackson Hole, Wyoming. With excitement they rode the lift and set out down the steep slopes on their mountain bikes. Part way down at full speed, Ted found himself piled into the mountain side, suffering some minor injuries, concussion and neck pain he continued on full speed through life, meeting it head on. Whether it's dirt bikes, or mountain bikes, construction or kids, Ted gives his heart and lives life to its fullest.

Ashley Greene and I are blessed to call the Roberts family our friends. Each of our children in our separate families have been blessed by the examples of kindness, hard work and tenacity that Ted and Nicolett have instilled in their children. Never have I known such strong, athletic children who meet others with such respect and confidence. Maybe it's their nature one might argue, maybe it's their schooling another might contest, but perhaps in great part it is the remarkable example set by their mother and father. By Teds example of kindness and meeting life head on, showing great faith and courage. By Nicolett's fierce fortitude and fearlessness.

Ashley and I decided to rally anyone we could to help support this good family in their challenge by organizing a benefit auction. Miraculously, all the logistics have fallen into place, in large part propelled by the reputation Ted has set forth. So many are eager to help him out, the man they have so respected for so long. In this endeavor we have been humbled by the overwhelming response of so many people. Many know Ted but many more do not and yet they give. It gives one cause to stop and ask- "if someone approached me today and needed something to help a stranger - would I?" I hope so. I don't know what my answer would have been before - but after the example of so many kind and giving hearts- the answer now is "yes."

This fundraiser could not have become a reality if not for the open and giving hearts who at a moment's notice with no previous association with Ted and Nicolett jump in and give with their whole hearts. In years past,it was always the Roberts family who were the first to be there when someone stood in need or needed some extra muscle to help with a move, or was suddenly stuck in the deep snow and unsure of how to make it home, or flooded with rain water and looking for a way to save their home, it was always the Roberts family who would quietly show up and move the furniture or the snow or the water and make everything alright. That is the kind of example I want to set for my kids, that is the life and legacy I think that many hope to leave for those around them.

The donors for the auction have been generous. That generosity is not complete without generous buyers who show up at the auction to bid and buy. That is what we need now at the auction. Come show support for a family who has always been there to support others. Come return the kindness Ted has always shown. Come rally with the Roberts and pass your hope and strength on to them. They don't need a shovel to dig away the snow or the rain, they need you- they need support. They need to know they are not alone.

The fundraiser is scheduled for Saturday, August 28 at 354 Countryside Lane in Belgrade.

Lunch by Naidas Night Offs will be served at 1 p.m. and is $5 plate. The lunch includes homemade sloppy joes, salad, chips, and a drink.

Live music is scheduled for 2 pm. A live auction is set for 3 p.m. Entry to the event is free.

Search : "Roberts Family Fundraiser" on Facebook to see more about donating to the GoFundMe and more about the auction.