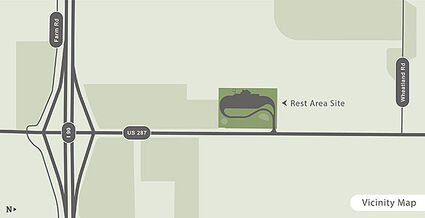 Pictured is the location of the planned Headwaters Rest Area in Three Forks. MDT Art

The City of Three Forks City Council approved to sign a letter last week that opposes the Headwaters Rest Area.

The Council unanimously voted to approve the letter written by Amy Weidinger that will be sent to Montana Governor Greg Gianforte asking him to put a halt to the planned rest area at the interchange of Interstate 90 and U.S. 287 in Broadwater County.

The letter states, "The City of Three Forks and Gallatin County already support Broadwater County due to their lack of law enforcement resources. Broadwater County has eight deputies to patrol and respond to 1,239 square miles...We do not have the emergency responders to support the increase in crime and service calls the Headwaters Rest Area will bring to our community." (See full letter below.)

Councilmember Dennis Nelson told Weidinger the letter was very well written and to the point.

Councilmember Gene Townsend told Weidinger he was impressed with the petition started in opposition to the rest area that now has over 1,300 signatures.

In April, the Montana Transportation Commission unanimously voted to approve a staff recommendation on a design-build contract for the new rest area at Interstate 90 exit 274 in Broadwater County near Three Forks. The new facility would replace the current rest area at the 19th Avenue Interchange in Bozeman.

According to Lisa Olmstead, Public Involvement Manager for DOWL, workers were clearing dry grass at the site last week as a fire prevention precaution in anticipation of the staging of construction equipment on the site. Olmstead added dirt work is expected to begin this week.

Montana Department of Transportation working with the City of Bozeman and Broadwater County, have announced the closing of the Bozeman Rest Area (located at Exit 305 on Interstate 90) and the building/opening of a new rest area located at the Interstate 90/Highway 287 interchange. We are asking you to shut this project down.

As it stands, Broadwater County does not have enough emergency personnel to support the current infrastructure, let alone the addition of a rest area that will statistically increase traffic, crime, and a transient community. The City of Three Forks and Gallatin County already support Broadwater County due to their lack of law enforcement resources. Broadwater County has eight deputies to patrol and respond to 1,239 square miles. Due to our proximity, Three Forks' law enforcement must leave to respond for mutual aid and is typically first on scene until BCSO arrives. This leaves the city limits, and Gallatin County, with less law enforcement that the Gallatin County taxpayers are supporting. The addition of this rest stop will put a greater strain on the City of Three Forks and Gallatin County. Last year, during the COVID-19 pandemic, the Bozeman Rest Area had 132 calls into 911 for emergency support. At the time we write this letter, there are already 99 reported calls for service to 911 to the Bozeman Rest Area! We do not have the emergency responders to support the increase in crime and emergency service calls the new Headwaters Rest Area will bring to our community. In addition, the Interstate 90/Highway 287 interchange already has 24-hour rest services to accommodate travelers through the area.

As public officials, we understand, respect, and appreciate the tremendous responsibility you have in leading the great State of Montana through these unprecedented times. The decisions you must make are complex, time- sensitive and have lasting consequences for the people of Montana. To that, we would like to humbly ask for your help.

We recognize and acknowledge the decisions you make are extremely difficult. We ask you to examine and research this project and the serious impacts it will have on the people of Three Forks and surrounding community. The overall well-being and state of our community depends on it.