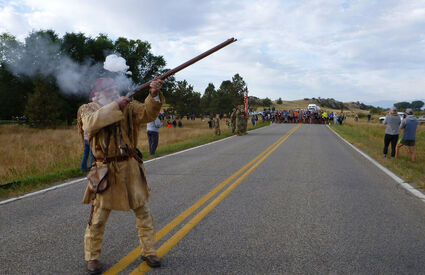 A Mountain Man fires his rifle to start the 2018 John Colter Run. The 2021 run is scheduled for Saturday, September 18 near Three Forks. Courtesy photo

The annual John Colter run is scheduled to return later this month.

The 2021 run will take place Saturday, September 21, at the Missouri Headwaters State Park near Three Forks. The event is hosted by the Big Sky Wind Drinkers running club.

According to Darryl Baker of the Big Sky Wind Drinkers, this will be the 44th John Colter Run.

"Universal Athletics did it for a number of years until Montana Rail Link stopped it due to runners crossing the tracks in front of the trains. Then about seven years ago, the Big Sky Wind Drinkers took it over," Baker said.

Once the Big Sky Wind Drinkers took over the event, Kurt Buchl worked with Montana Rail Link, and they found a new route just east of the river where the trains cross over a side channel into the Gallatin River.

"We now go under that bridge in waist-deep water, then over to the river where we cross and finish in the Headwaters State Park," Baker said.

After canceling the run in 2020 because of Covid-19, organizers are excited to bring it back in 2021.

"We always have much more than the run, and the Colter Run has become one of the most enjoyable runs in the valley. We have runners from age 6 to 90 run this race. And everyone supports each other. We are indeed happy to be able to have this run again this year. It is a community event that everyone enjoys," Baker said.

Those who participate in the John Colter Run will find a course that looks much like it did in the early 1800s.

"The course and the surrounding area is little changed from when John Colter was in the area in 1806. The mine is immediately adjacent to the course, but the runners can't see it. GCC has been very gracious to us in letting us have the run on their property, and it is a closed course meaning you can't access it any other time," said Baker. "We try to make the course fun. Runners must watch for trail markings to stay on course. We mark it with rock cairns, flags, some paint, skulls, beer bottles, tipis, and whatever else we can find out there. From John Colter's account, the actual location where the incident happened is believed to be just west of the Headwaters State Park. But we try to make this as fun and realistic as possible with a river crossing at the end."

Buchl said this is a fantastic community event, with most of the net proceeds being donated directly to the Headwaters State Park. He also thanked all those who make the run happen.

“This race could not take place without the assistance and consideration of the Head Waters State Park, David Andrus to allow us to start and finish in park space, GCC allowing us access to run across their property which is only accessible this one weekend, Montana Rail Link for working with the BSWD’s for access across the rail crossing and under the railroad bridge, Gallatin County Sherriff’s posse for having two swift water rescue teams to oversee the 2 river crossings as well as have extraction plans to assist with any on course injuries. The Montana ROTC team sweeps the course with first aid supplies and injury training as well as we have the Three Forks ambulance team at the finish to assist with any injuries and rattlesnake incidences,” he said.

Organizers recommend those participating and in attendance wear masks while in the crowd at the park, but not while running.

300 people are allotted to sign up for the run, which is usually filled each year.

Baker added they would once again have a Mountain Man start the run by firing his 50 caliber black powder rifle.

There will also be a barbecue, live music, and prizes.

The race will start promptly at 9 a.m., and those participating must pre-register at https://runsignup.com/Race/MT/ThreeForks/JohnColterRun.

John Colter was discharged from the Lewis & Clark expedition in 1806 to pursue trapping opportunities throughout Missouri River country and the greater Yellowstone area. In the fall of 1808, Colter and his partner at the time, John Potts, were trapping beaver in the Three Forks area. This area was inhabited by Blackfeet Indians. Potts and Colter avoided the Blackfeet by trapping at night and concealing themselves during the day.

Potts and Colter were discovered by the Blackfeet one morning. Potts attempted to flee downriver in their canoe and was wounded. Instead of returning to shore, Potts shot and killed one of the Blackfeet and was killed in return. Colter (who had not attempted to escape) was stripped naked, taken 300-400 yards out into a field, and told to save himself if he could. So Colter ran. 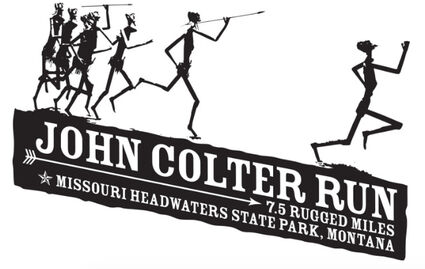 After several miles, Colter had outdistanced all but one of the Blackfeet who carried with him a spear.  The Indian had almost caught up to Colter when Colter stopped suddenly, turned around, and spread his arms. This was a surprise, causing his pursuer to fall while attempting to throw the spear. The spear broke in the ground and Colter seized the pointed end, killing the Indian with it. Colter continued running to the Madison River where he hid under a pile of driftwood while the Blackfeet continued their hunt for him. After dark, Colter slipped down river and began his journey toward safety. Exhausted, cold, and naked, Colter limped into Fort Lisa seven days later- 250 miles away on the Big Horn River.