Wolves move to 2-0 with shutout of visiting Red Lodge 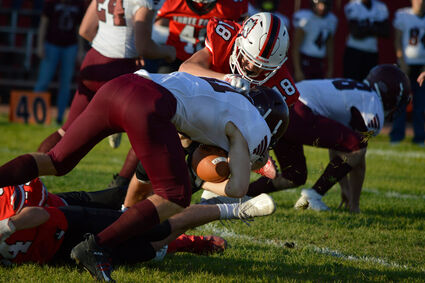 Three Forks senior defensive back Collin Stone gets the tackle earlier this season against Roundup. The Wolves defense has given up just six points in the first eight quarters of the season. Voice photo by Melissa Jenkins

After a scoreless first two-quarters last Friday night at home against Red Lodge, the Three Forks High School football team opened the second half in explosive fashion. A 95-yard kickoff return for a touchdown by Jacob Buchignani would end up being the only point the Wolves would need in a 6-0 victory to improve their record to 2-0.

Head Coach Connor Sullivan lauded his special teams for their efforts on the game's lone score.

"That was huge for us. We preach special teams during the week and try to get at least two periods of it in practice each day. Jacob is explosive. He's what I call a...