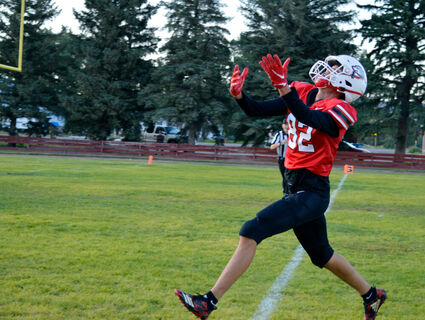 The Three Forks High School Football team (2-1) will look to get back into the win column when they wrap up non-conference play Friday night against visiting Anaconda (0-3).

In action last week, the Wolves fell 43-0 on the road against the top-ranked team in Class B, Florence Carlton.

Head Coach Connor Sullivan thought his team missed out on some opportunities during the game, adding the Falcons are a good team and the number one team in the state for a reason.

"But I definitely think we can play better. We have to clean some stuff up and move on to Anaconda," he said.

Three Forks did not give up a point in the second half, and Sullivan praised the play of senior Finn Tesoro and sophomore Tallyn McCauley.

"I thought Finn had a solid game on defense. He was in the right position and made some great plays on the ball, and tackled well. I also thought Tallyn did a solid job for his first-ever career start versus a tough team," Sullivan said.

Looking towards this week's matchup against the Copperheads, Sullivan feels his team needs to have a fast start on offense.

"These last two games, we haven't really got in a rhythm. Start fast and get the ground game going to open up the pass," he said.

Along with a quick start, Sullivan also stressed the importance of physicality for the team and said they need to establish it early and maintain it the whole game.

Sullivan added players need to also do their own job, not anybody else's.

"If we do that, the rest will take care of itself. Lastly, execute consistently in all three phases of the game," he said.