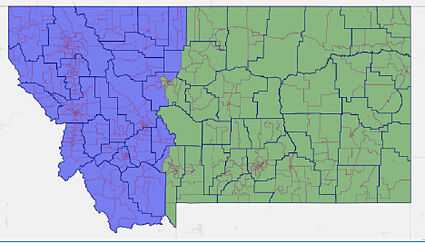 HELENA - The commission tasked with dividing Montana into two U.S. House districts for the first time since the 1980s asked the public for input last month. Montanans responded with an earful, submitting 231 proposed maps, some of them duplicates, and more than a hundred pages of written comment as of an initial deadline this week.

The proposals are, literally, all over the map. They include efforts that group most of the state's urban areas into a single district and divide the state lengthwise into northern and southern districts.

Most, however, either divide the state into western and eastern districts, which would produce two Republican-leaning House seats, or group Bozeman and Missoula together in a southwest district that would give western Montana Democrats a better shot at competing with Republicans.

The choice between those two strategies appears likely to be the central debate that will play out as the Districting and Apportionment Commission works out the congressional map Montana elections will use for 10 years starting in 2022. Conservative commentators have generally argued the commission should take a politics-blind approach to drawing the boundaries. Any effort to draw districts with an eye toward encouraging competitiveness, they say, should be considered gerrymandering.

"What would be ideal is you go into a room of kindergarteners, don't tell them any political data, and say, 'could you guys draw two maps?' And I think you're going to get this east-west split in most cases," GOP official Terry Nelson said in Zoom testimony at a commission meeting Friday. "When you start seeing things have fingers going in all different directions, I think that's when you know there's political gerrymandering, or political favoritism going on."

Some progressive groups, on the other hand, have said adopting a map that creates a competitive district will better serve the state by encouraging less polarizing candidates, even if it's less geographically elegant.

Allison Dale-Riddle, a Helena resident and political scientist who has worked on Democratic campaigns, told commissioners Friday that districts that are generally safe seats for one party or the other tend to elect less moderate politicians because elections are effectively decided in party primaries, meaning politicians are motivated to focus their appeal on their party's base voters instead of the independent voters who can swing the results of competitive general elections.

"I have increasingly come to the view that extreme partisanship has become one of the major problems in our political system, and I feel pretty strongly that competitive maps can provide an antidote," Dale-Riddle said during public comment Friday.

Dave's Redistricting, a website that lets users create and analyze political maps, indicates that one approach to dividing Montana into compact eastern and western congressional districts would produce two Republican-leaning districts. Based on the results of elections since 2016, a north-south line running just west of Great Falls and just west of Bozeman would produce a western district that has, historically, voted Republican on a 53-44 margin and an eastern district that has voted Republican on a 57-40 margin.

Montana voters have at times elected moderate Democrats in statewide elections, putting former governors Brian Schweitzer and Steve Bullock in office for two terms each, and sending Sen. Jon Tester, now in his third term, to Washington, D.C. as recently as 2018. However, it's been more than two decades since the state has elected a Democrat to the U.S. House, and the state as a whole may be shifting further to the right. Republicans swept every statewide race on the ballot in the 2020 cycle, for example, electing Republican U.S. Rep. Matt Rosendale by a 56-44 margin and voting for Republican President Donald Trump 57-41.

Rosendale, who is now serving his first two-year term in Congress, has raised more than $477,000 to support a likely 2022 re-election bid, according to Federal Election Commission filings. Several other candidates have also announced 2022 U.S. House bids: Republicans Ryan Zinke and Al Olszewski as well as Democrats Monica Tranel, Laurie Bishop, Cora Neumann, and Jack Ballard. With the district lines not yet drawn, it's unclear which candidates will compete directly.

Districting commissioners noted Friday that western Montana population growth means the east-west map the state used in the 1980s, which included Bozeman and Helena in the western district, is no longer a viable option without modifications. A mockup prepared by commission staff indicates that, with 2020 population counts, the 1980 western district would have 647,000 residents, compared to 437,000 in the east - about three constituents in the west for every two in the east.

Unlike states where political boundaries are drawn by the partisan state legislatures, Montana's state Constitution specifies that congressional and legislative district maps will be drawn following each decennial census by an independent five-member commission. Four of the five members, two from each major party, are appointed by party leaders in the state Legislature. The fifth member, a chair positioned to be a tiebreaker vote, has been appointed this cycle by the Montana Supreme Court.

Data from the 2020 census signaled that Montana has added enough residents to regain the second U.S. House seat the state lost following the 1990 census. The districting commission, which received detailed census data in August, has until Nov. 14 to file a final congressional mapping plan with the Montana secretary of state.

Commissioners plan to meet again Oct. 5 to choose specific map proposals they'll use to solicit feedback from the public. More information on the commission, including instructions for submitting comments, is available at mtredistricting.gov.

The commission will take up its other redistricting task, redrawing Montana's state legislative districts to account for population change over the last decade, next year.

A full list of the proposed congressional maps submitted to the districting commission is available at mtredistricting.gov/submitted-congressional-maps.