The agency now has a year to conduct a further review of the species using the best available science to determine whether listing under the Endangered Species Act is warranted.

The process was initiated this summer when environmental groups asked the agency to relist the animals through two separate petitions. The groups filed the petitions after lawmakers in Montana and Idaho passed laws that encouraged aggressive population reduction by broadening the methods hunters could use to harvest wolves and expanding the trapping season.

In a release about the decision, the agency wrote that the two petitions presented "substantial information that potential increases in human-caused mortality may pose a threat to the gray wolf in the western U.S." and that the "new regulatory mechanisms in Idaho and Montana may be inadequate to address this threat." The two other options before the agency included denying the petition, which would have maintained the status quo, or implementing an emergency relisting, which was what the environmental groups had asked for.

For now, existing management plans in Idaho and Montana will not be impacted by the agency's review, according to FWS spokesperson Joe Szuszwalak, which means current hunting regulations in those states will remain in effect.

"FWP looks forward to working with the USFWS on the review they're undertaking and will provide them with any information they need. Montana has successfully managed wolves for more than a decade and can continue to do so in a fashion that keeps their numbers at sustainable levels above minimum thresholds," FWP spokesperson Greg Lemon said in an emailed statement.

Measures passed by Idaho and Montana lawmakers this spring drew intense scrutiny at both the state and federal level, with Montana's legalization of snaring, expanded trapping season and hunter reimbursement proposals collectively garnering more than 2,200 comments, most in opposition.

After Montana Gov. Greg Gianforte signed into law proposals that expanded the trapping season, removed bag limits, authorized reimbursement for wolf harvests, and legalized neck snares and bait-aided and night hunting, the pressure campaign shifted. Comments poured into the inboxes of Montana Fish and Wildlife Commissioners and federal agency heads, including U.S. Interior Secretary Deb Haaland and U.S. Forest Service leadership, which was asked to ban wolf trapping in wilderness areas. The latest request came in the form of a letter submitted by dozens of tribal leaders asking Haaland to place wolves back on the endangered species list due to concerns about states' management policies for wolves.

On Wednesday, the opening day of Montana's wolf hunting season, and several weeks past the 90-day window FWS had to evaluate the Center for Biological Diversity's relisting petition, the agency decided a closer look at state management of wolves is warranted.

Andrea Zaccardi, senior attorney at the nonprofit Center for Biological Diversity, said, "It's been a pretty nonstop effort" that has included action from more than 25,000 of the organization's members.

"I think it just shows that people around the country are pretty outraged as to what's going on," she said.

Zaccardi said she offered comment at the Montana Fish and Wildlife Commission meetings where commissioners weighed 2021 wolf hunting regulations and was dismayed to see commissioners disregard the recommendations of Montana Fish, Wildlife and Parks staff biologists on a number of proposals, including night hunting and the use of snares on public lands.

"We need to revisit how wildlife decisions are made in the states and the makeup of commissions that are making those decisions," she said. "It was pretty clear that the trappers had the state's ear and the commission was going to do whatever the trappers wanted and ignore everybody else. It's been extremely frustrating."

"It's tragic - and perhaps not coincidental - that this finding comes on the same day that the state of Montana has unleashed hunters to kill hundreds of wolves throughout the state, including on the edge of Yellowstone National Park," WildEarth Guardians Executive Director John Horning said in an emailed statement. WildEarth Guardians is one of the groups that filed the later petition.

FWP drew up regulations for the 2021-2022 season that allow individuals to take up to 10 wolves per season through a combination of hunting and trapping. In a departure from previous wolf-hunting regulations, hunting with bait is now allowed, as is using artificial lights and night vision scopes when hunting for wolves on private land. There's a provision in the regulations that initiates commission review once 450 wolves have been harvested with potential for "rapid in-season adjustments" to regulations. If harvests exceed a threshold set for each of seven management regions, that also triggers commission review. Region One has the highest such threshold with 195 wolves. Review is also required if a grizzly bear or lynx is captured in a wolf trap or snare.

Idaho's regulations don't include daily or seasonal limits, and establish a year-round trapping season on private lands. Pursuing wolves with hounds, all-terrain vehicles and snowmobiles is allowed. Existing regulations allowed for hunter reimbursement for harvest - characterized by critics as a bounty - but the new law goes a step further and authorizes the state to pay private contractors to kill wolves.

The Montana Trappers Association and Rep. Paul Fielder, R-Thompson Falls, who sponsored the bills extending the wolf trapping season and legalizing neck snares for wolves, had not responded to a request for comment by press time.

Gianforte posted a statement about the decision on Facebook alleging federal overreach into the state's wildlife management plans. 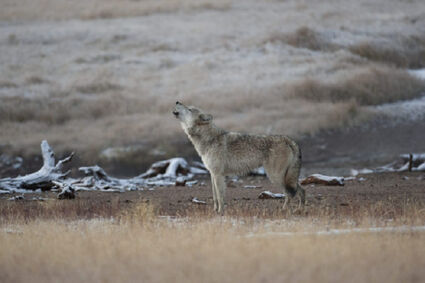 "Montana has been effectively managing our wolf population for years, and we don't need Washington coming in and second guessing our science-based approach. Montana's new regulations have been carefully crafted and reflect our commitment to ensuring a sustainable wolf population in the state," he said.

Zaccardi added that the Center for Biological Diversity has filed a notice of intent to sue Idaho and Montana over the states' new trapping regulations. They say neck snares and expanded trapping regulations present a threat to grizzly bear and lynx recovery. Both animals are protected under the Endangered Species Act and share habitat with gray wolves.

The agency is expected to conclude its status assessment of gray wolves early next summer.