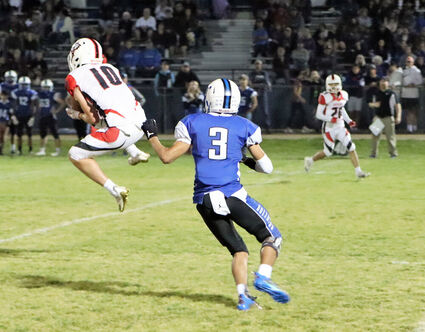 The Wolves opened conference play last week with a 35-0 road loss at third-ranked Townsend. Head Coach Connor Sullivan said the first quarter was a struggle on both sides of the ball, but after that, he thought the offense played pretty well and moved the ball consistently.

Sullivan said they found out what the Bulldogs were hurting them with on defense and finally got a few stops.

Sullivan praised senior Austin Allen for his play during the game.

"I thought Austin (Allen) showed up consistently all game! He made some great plays for us offensively to keep drives alive," Sullivan said.

Three Forks will once again face a tough battle against the Panthers, who fell 26-14 last week at home to second-ranked Columbus. Jefferson has wins over Whitehall and Cut Bank, and their other loss was a tightly contested 20-19 game against fifth-ranked Big Fork.

"We need to start fast and set the tempo from the opening kickoff. We also need to limit big plays. Townsend scored on long big plays, and it just kind of deflated us. But if we start fast, and we're consistent in all three phases, we put ourselves in a good spot to win," Sullivan said.