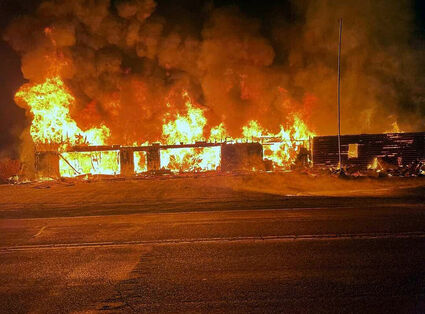 Britta Oliverson was able to capture this picture of the LaHood Park Steakhouse Fire. Photo courtesy of Whitehall Ledger.

Over nine decades of meals, laughter, memories, and music came to a screeching halt in the early morning hours of Thursday, September 30, 2021, when LaHood Park Steakhouse went up in flames.

"It happened so fast, we couldn't do anything," LaHood employee and tenant Stephanie Adams said. "We grabbed the laundry basket of clean clothes I had just washed, our dogs, some sweaters, and that's it."

Built by Shadan LaHood in 1928, the property transitioned from a general store to a post office, then a hotel and restaurant. LaHood's was the origination of what is now Rockin' the Rivers, then began as Rockin' the Rockies by owner Steve Wendell. Then it became a Montana legend: one of the best steakhouses around.

Just before 5AM on Thursday Adams said she heard what she thought were items being dropped on the floor in the restaurant area, which was directly above her downstairs apartment. Thinking it was a produce delivery, which delivered that early, she tried to go back to sleep but something felt off. She opened the basement door to find the walkway filled with smoke. The west side of the building was on fire. Scrambling to Phil Lalich's camper onsite, Adams woke the owner. At 4:56AM the Whitehall Fire Department was alerted – and by then the building's roof was completely engulfed in flames.

Adams and her boyfriend lost everything. Lalich, who is in the process of building a home and had all his personal belongings stored beneath the building, also lost everything except what he had in his camper at the time. Lalich has been unavailable for comment.

Whitehall Assistant Fire Chief Colton Howser said that once his team arrived, the building was a loss. Montana State Fire Marshall declared the fire's origination and cause undetermined.

In less than a week since the fire, Adams said the community has provided much comfort and needed items. She and her partner have purchased a camper, as housing in the area is at a premium, and have received many donations of home goods. Currently they are looking for kitchenware and bedding. A donation drop off has been established at the Whitehall Ledger office and is available during regular business hours. Adams also said they are seeking referrals of who to have side the camper in preparation for winter. If you have any suggestions, please contact Adams at 406-202-8973.

In December 2001, a fire destroyed the hotel portion of LaHood, which was also undetermined in cause and origination.

Many patrons reached out to the Whitehall Ledger to share their fondest memories and photos of the now-lost LaHoods. Here are just a few:

Having grown up right next to LaHood I believe I'm uniquely qualified to provide a little bit of nostalgia for a place a select few have called home over the years. With Cardwell being the rural community that it is, LaHood was the only place that provided a sense of "town" for me personally. On any given day I could walk down the highway or railroad tracks with a few cents in my pocket and purchase an assortment of goodies. It was once home to one of the best haunted houses I've ever been able to attend during any of my childhood Halloween seasons. Since moving to Southern California I've taken up the game of beach volleyball avidly. But it was on the rocky sand of LaHood that I really discovered a love for the sport from some of the summer tournaments it hosted over the years. It's always been known for a great steak. I took several dates there over the years for a "fancy" dinner. Grateful no one was injured in the fire and hope for nothing but best for any future plans of the property.

So sad. What a wonderful place to meet our Bozeman family. We celebrated MANY birthdays, Mother's Day and father's days there. Very sad, but thankful no one was hurt. We were actually headed there for dinner TONIGHT (9/30)! - Crystal Christison, Helena

Here's a photo of the Whitehall High School Class of 1974 40th Reunion Dinner at LaHood Park Steakhouse. We had a great time at the dinner! - Sandy Wallace

Was so sorry that another landmark is gone. I am sending a picture of a label that is inside an old metal footlocker that my father-in-law kept his vet supplies in. I have it for sale in my shop in Ennis. Just a nice piece of memorabilia. - Connie Olind

This was my wife's Birthday party at LaHood on the 23rd of July. The staff was wonderful.