When I was growing up, Halloween was a huge deal.

Even when my mom didn't have the time to help plan out something, I always dressed up, even if it was in one of those awful costumes from the 1980s that had plastic masks. I'm not sure how it was legal to sell those because I can still vividly remember not being able to see or breathe.

There were years I'd have a pretty elaborate costume and once won first place at the Jim Bridger Power Plant contest as a homemade "Rubik's Cube." I always enjoyed the parties at school and seeing how everyone dressed up.

There were always a few kids that seemed to have planned their costumes for years, and a few times that was me, of course when I wasn't dressed up with my hazardous outfit bought at the last minute from the nearly bare shelves at K-Mart.

I continued to dress up into junior high, but the fun was literally stripped from my hands in seventh grade.

I'm sure there is a debate about the age too old for trick or treating, but I never considered it too much of a big deal. I figure if kids are going door to door even into high school, they aren't getting into some other Halloween mischief, which would end up putting a damper on my "spooky season" fun.

A group of my fellow seventh graders decided we wanted to trick or treat but wanted to do so in a different area of town. There was a neighborhood in the city affectionately known as "snob hill," where we always wanted to go. Our thinking was that the bigger the house, the better the candy, and often this was often true with some of the "snob hill" houses handing out full-sized candy bars or sodas. There was always a couple of homes that would hand out something like an apple which is always depressing to a kid trick or treating, but for the most part, it was well worth the trip to the other side of town.

On this fateful night, I had spent well over an hour trick or treating, and my pillowcase was about as full as it could get. I was more than happy to have a bunch of snacks for the next few weeks, but that excitement was taken away in a heartbeat when an older kid came running by and snatched the pillowcase from my hands.

Even though I was nearly a teenager, I'm pretty sure I instantly shed a few tears. My friends were lovely enough to split up their candy, but it was at that moment that I stopped caring so much about Halloween. It was an end of innocence and the finale of my trick-or-treating career. 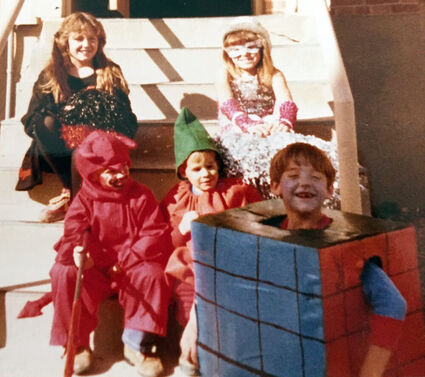 Here I am as the "Rubik's Cube" at the Jim Bridger Power Plant Halloween Costume Contest.

When my kids were younger, I would be a sport and take them trick or treating, but the whole time I was looking for that same hoodlum to come running around the corner and to steal their pillowcase full of candy. This time I was ready, but they never showed up.

Now the kids are older; they do not have as much joy for Halloween other than the scary movies they seem to watch from about the start of August.

Despite my dread for Halloween these days, I see October 31st bring joy to many people, and I wonder if I can ever find joy again.

I think one of these years I should just rent one of those silly dinosaur costumes where you can't tell how tall someone is, and I will go out trick or treating. If I can make it through the night without someone stealing my pillowcase, I will consider it a win and maybe will look forward to Halloween again. Heck, perhaps I will just recreate the Rubik's Cube costume and host a Halloween party, but I probably should take baby steps before I get that elaborate.