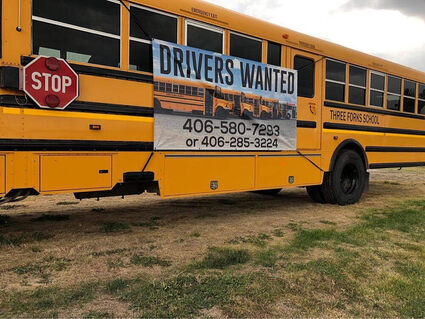 A school bus near the Three Forks football field advertises for drivers. Districts across the state have been having a rough time filling positions. Voice photo by Melissa Jenkins

Though there is a continual need for drivers every year, transportation managers say that schools this fall are experiencing the most extreme need they have seen. They point to a national labor shortage, the effects of COVID-19, and competition from other jobs and unemployment benefits as possible causes.

Managers and bus drivers also note that driving a school bus is a part-time, split-shift position. In some districts, the bus driver shortage has resulted in earlier student drop-offs, later pickups, fuller buses, and canceled sporting events, but transportation managers say they have largely been able to shield the public from the shortage's effects with an all-hands-on-deck approach.

"This is our 80th school year servicing the kids in Missoula County, and it has been by far the most challenging. It has been an unbelievable, colossal effort," said Robert "Mitch" Mitchell, general manager of Beach Transportation, the Missoula-based, family-owned company that contracts with the school district. "We have owners' wives, owners' [adult] children, staff's children - we have everybody that can possibly be out driving school buses with no room for error."

(Substitute drivers meet all legal requirements for the work, including a commercial driver license, or CDL, according to transportation directors.)

"It is a national crisis," Mitchell said. "I got a call last week from the Spokane school system. They have 150 bus routes. They combined 150 into 100 routes and still didn't have enough bus drivers. That's why, here in Missoula, we're pretty proud to say we've gotten every student to school without any delays at all." Of the 34 Missoula routes that needed to be filled (out of 90), he said, vacancies are down to 13 as a result of recruiting, offering potential drivers a job on Day One as bus attendants, paying for training, and increasing guaranteed hours.

"It's the worst I've seen it," said activities and transportation director Kyle Dunfee. Even though Miles City does not provide bus transportation for students to get to school aside from special education students, he said, the driver shortage is affecting sports and extracurricular bus routes. "It really has created logistical nightmares for scheduling and carrying out activities as a whole," he said.

"When I came into this position [three years ago], I had five to seven drivers I could rely on," Dunfee said. "This year, I have one driver, our main driver, who is our bus mechanic. He does a lot of things for our district and drives 95% of our trips." A year ago, the district - which owns its buses but doesn't offer benefits to drivers - raised its hourly driver rate from $15 to $20. Even so, he said, "I've had a total of zero applications in one year."

Through creative scheduling such as hosting sporting events rather than traveling to games and sending its Future Farmers of America team to national competition on the Broadus bus with the Broadus team, the district has avoided canceling events.

"At times, it takes two to three times longer to get kids home because of the bus shuttling situation," said Laurel High School Principal Shawnda Zahara. "Many times we have to run a double route: Go out, pick up one group of students, drop them off, and go back and get a second group, which sometimes can make them late to school."

In early September, Zahara and three staff members drove vans so the soccer teams could attend a tournament in Hamilton. "There were no buses available anywhere to rent. Nothing," she said. "We also had to cancel a middle school cross-country event because there was no busing available."

The shortage has steadily been getting worse over the past four to five years, she said, adding that some regular drivers have not been able to drive due to COVID or other illnesses, while others were unavailable due to the increased demands of their other jobs as wildland firefighters.

In the Flathead Valley, sports events also have been canceled or rescheduled, and parents have had to drive team members to games.

"Early this year, we were unable to run some of our athletic field trips," said Annie Doolan, transportation supervisor of Kalispell Public Schools, who explained that athletic event drivers were  shifted to cover regular school routes.

"That was in the media, and our community showed their support," Doolan said. "Drivers that had CDLs contacted me, and currently I am fully staffed for substitute bus drivers and route drivers."

She said Kalispell Public Schools runs 15 routes and contracts another 34 routes to private bussing companies Harlow's and Treasure State, which are also looking for drivers.

Libby is maintaining its bus schedule without doubling up routes by using shop and office employees to cover routes when drivers are sick, according to Harlow's, and Polson currently has a 30% deficit in its driver staff. "We're hanging in there, but just barely," said Scott Boen, director of human resources and communications for Polson School District.

Brian Gartner, maintenance/transportation director at Darby School, said the school is having "extreme trouble" finding drivers, especially because prospective drivers are required to obtain a raft of credentials before they can take the wheel. Necessary credentials include a CDL, passenger and school bus driver endorsements, air brakes endorsement, a first aid certificate, physical exam, and drug, alcohol and background checks.

In Havre, "We've eaten a couple routes, shrunken down, stuffed our buses to capacity so we can have fewer drivers," said Scott Filius, facilities and transportation director for Havre Public Schools. "In a perfect world, I would add three routes. We have 13 routes with 11 drivers, and we need two more -  the bottom line is it all comes down to wages," he said.

Transportation directors said the state's ongoing labor shortage is driving up wages and increasing competition for drivers, especially those who hold a CDL.

"If you have a commercial driver's license, you can drive a cement truck for construction," Filius said, echoing other administrators who note that FedEx, UPS, and long-haul trucking companies offer full-time hours and better pay.

Having worked as a truck driver for 25 years, Helena school bus driver Carl Moore said the work is "fairly easy" for him, including student management:  "I don't have much problems with them. It's seat belts, masks, and then I turn the country western music up. They just sit there and look at their phones," he said.

"It's good," he said of the job. "I'm retired. It's having something to do." Transportation managers agreed that retirees are their top applicant pool.

When Big Sky Bus Lines General Manager Barbie Stucker of Great Falls started in her family's transportation business 14 years ago, "It was easier. I don't really know what's changed." she said. "COVID has made it a little worse" when people fall ill or fear getting sick. She handles shortages by changing schedules and assigning drivers to cover multiple routes, resulting in a few delays, but no dropped routes. "Could we hire 10 more [drivers] and be happy?" she asked. "Yes."

Offering health insurance and other benefits seems to make a difference.

"I think that's the biggest draw that we have, to be honest with you," said Jeremey Whitlock, transportation director for the Butte School District, which operates its own bus fleet. Butte guarantees drivers four hours of work per day, similar to private companies, but also offers full health insurance and retirement benefits, even at 20 hours per week, he said.

"A lot of our drivers have left other professions - firefighters, ex-teachers, distributing companies, ex-state employees. They come here because that health insurance is a big carrot. It's expensive, but it allows us to get kids to school," Whitlock said. Butte currently has 24 drivers for 24 routes and does advertise for substitute drivers.

Lewistown Public Schools also runs its own fleet of 13 yellow buses and five activity buses, employs its own drivers, and offers benefits for drivers working 20-25 hours per week, including health insurance, paid vacation and holidays, sick leave, and Public Employee Retirement System benefits. "A lot of drivers are retired, so this augments their retirement," said transportation director Robert Odermann. "Some of them drive just for the insurance." Still, Odermann said, "I'm short one route driver right now [out of nine routes] and could use two to three subs and two to three activity drivers."

Even though he helps potential drivers obtain the necessary credentials, "You explain all that to a prospective person, a retired person, and they don't want to go through all of those steps, even though we offer to pay" the associated fees, he said. A new driver in Lewistown is paid $16.98 an hour and receives free training plus annual raises.

Many districts and companies have increased their wages. In Bozeman, where the cost of living is high, wages rose in late August from about $20 to between $24 to $25 per hour, according to Douglas Kellie, transportation director for Bozeman Public Schools, which contracts its transportation services to First Student, Inc.

First Student is also offering new drivers a signing bonus of up to $4,000, he said, even as Bozeman is currently short of drivers and has five drivers with interstate CDL licenses helping out.

"We've had to double-up a number of routes because of the driver shortage, which is nationwide. More kids per bus, maybe a bit of a longer bus ride for the students, but we're getting them to school on time," Kellie said.

It was recently owned by UK-based FirstGroup, which on April 23 announced that it would sell First Student to EQT Infrastructure, a global private equity firm and infrastructure investor. "While challenging, the pandemic has illustrated that we are able to maintain operations and generate stable returns even in the most difficult operating conditions," First Student President Paul Osland said in a press release announcing the sale.

Messages left at FirstGroup and First Student's corporate offices were not answered. The First Student location manager in Helena, Bevann Hamill, confirmed the sale and said it has had no effect locally.

Helena is currently short 14 drivers out of a normal roster of 75, she said, adding that First Student is offering a sign-on bonus of $3,000 for applicants without credentials and $4,000 for fully credentialed drivers. On Sept. 29, Helena school bus drivers voted  to ratify a recently negotiated contract that raises starting wages from $16 to $17.50 hourly, according to a First Student spokesperson. The Helena bus drivers are members of Amalgamated Transit Union Local 381.

Hamill believes the labor pool has contracted due to unemployment assistance during the COVID pandemic. "Once those checks stopped, we anticipated that people were going to come in," but that hasn't yet happened, she said. She believes the situation could take a year and half to turn around.

A recent in-person visit to the Helena First Student facility found mechanics, office workers and managers all filling in as bus drivers, with only district transportation manager Tom Cohn present as dispatcher. "This is the worst year for driver shortage in Helena," Cohn said.

In multiple cases, he said, "We're using one bus to make two runs." The result is longer days at school for kids. Some middle school students are being dropped at school around 7 a.m., an hour before classes begin, and some elementary and high school students are waiting at school later than usual in the afternoons to be picked up by a bus.

With Helena routes covering 3,500 miles and about 3,600 bus stops a day, the challenge is complex, he said, but there are no plans to cancel any services.

"We will continue to run routes at some level in order to get kids to school," Cohn said. "We all would like to get back to normal."