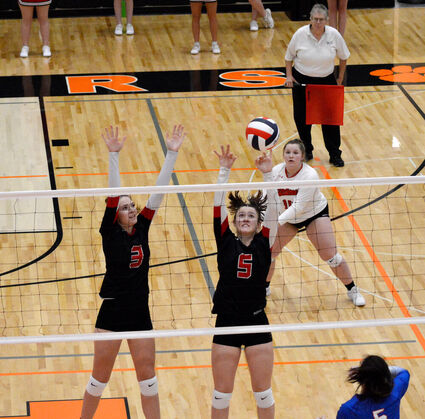 Halee Wilson and Natalie Pestel go for the block at last week's 5B District Tournament.

The Three Forks High School volleyball team fell one win short of a berth at this week’s Southern B Divisional Tournament. After starting last week’s 5B District Tournament in Manhattan 2-1 with wins over Big Timber and Whitehall, the Wolves were eliminated from the postseason with a three-set loss to the host Tigers (25-19, 25-17, 25-15).

We were so excited about the way our kids started play at the district tourney. They really did a nice job executing our game plan, and I think it showed in how we handled Big Timber that first match,” Head Coach Shann Mack said. 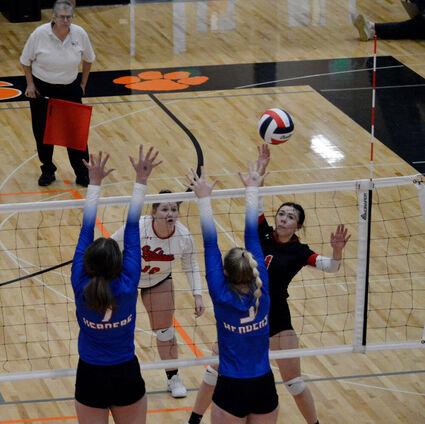 After a three-set loss (25-14, 25-7, 25-9) to eventual champion Jefferson, Three Forks bounced back with a three-set sweep of Whitehall to advance to the match against Manhattan for third place and a spot at Divisionals.

“We were so proud of our kids for the way they played on Thursday night against Whitehall. We had already played two matches, and we were a little worried about fatigue setting in. These kids were so resilient and battles the fatigue really well. To come out and beat Whitehall the way we did after losing to them in four (regular-season finale), shows a lot about the growth this team has made over the season,” said Mack. “The Whitehall match was yet another example of how executing a game plan can lead to a successful outcome. Our plan was to make some of the other athletes from Whitehall touch the ball more, and our girls hardly missed a serving zone, which helped us stay in the system and control the match.”