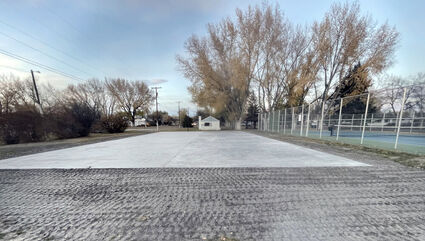 Pictured is the pad for the new City of Three Forks Ice Rink. Voice photo by Jack H. Smith

Last Thursday, Three Forks Mayor Sean Gifford was hard at work painting the warming hut at the new City of Three Forks Ice Rink at Stevenson Park. If all goes as planned, Gifford hopes to open the rink to the public during the Christmas Stroll scheduled for Friday, December 3.

Gifford said the opening is, of course, weather dependent and, once up and running, will be accessible 24 hours a day.

"Some people like to get up early and do their exercise by skating around the rink," he said.

When it comes time to resurface the rink or other maintenance, Gifford added they would probably shut it down at night, but other than that, when it is open, there will be no time limits.

Since fundraising began in 2020 for the $177,000 project, the City of Three Forks has received numerous donations, including a recent $2,500 donation from the owners of the Plaza Bar.

Gifford said this generous donation pushed him over the edge to complete the remodel of the warming hut, which includes work on the floor mats, benches, fireplace, and painting.

Donations have also been used for the concrete pad, which was completed in August, nets, lights, and liners.

Gifford also said he has his fingers crossed for a $97,000 tourism grant he applied for that will go towards a refrigeration system that will keep the rink open up for use for an outside temperature of 50 degrees. According to Gifford, the system has two compressors that pump glycol through a piping system, which could keep the rink operational into March or April.

Gifford sees two benefits of having the ring, the first being it can extend the tourism season in Three Forks into the winter. After conversations with officials in Philipsburg and Virginia City, Gifford said they host tournaments during winter, bringing people from across to their towns.

"It extends the season for the bars, restaurants, and hotels whose business usually slows down during the winter. My hope is to make the rink a destination, and people will travel here to skate and then stop at a bar or restaurant after a game of hockey," he said.

Along with a potential boon to tourism, Gifford believes the rink will also serve as a way to give local kids something to do during the winter months.

"Not everybody can afford to go and ski. It's expensive, and it's a drive. Those kids are left out with nothing to do in the winter. My hope is to introduce people to the sport of hockey and skating and to give them something to do during winter," said Gifford. "If you go to Bozeman to use their rink, you have to pay, and you have to rent skates. This is something that local kids can use. They can ride their bikes and use it for free."

Donations can be dropped off at City Hall.