Where CWD has been found in the state, and what wildlife managers are doing to slow its spread. 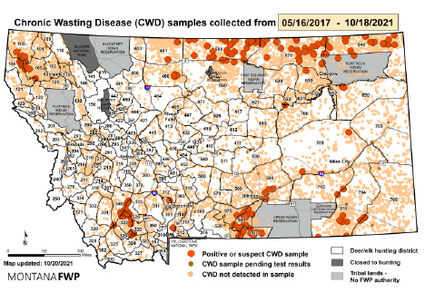 Since chronic wasting disease, or CWD, was detected in Montana's wildlife in 2017, the affliction has become increasingly widespread. Though the CWD positivity rate among all deer, elk and moose sampled in the state remains in the single digits, there are parts of the state where enough animals - namely white-tailed deer - have tested positive for CWD that wildlife managers are concerned about population declines like those seen in southeast Wyoming. This CWD primer explains the cause and effects of CWD, what's being done to combat it, and how hunters can help wildlife managers limit its sp...