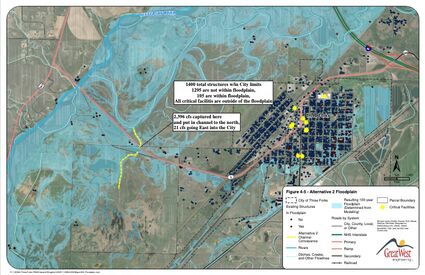 According to city officials, the proposed project is a conveyance channel and culvert crossing mitigation option designed to capture overflow flooding from the Jefferson River before reaching the City of Three Forks.

The City has been working with Headwaters Economics on the pilot project since 2020.

According the Headwaters Economics, updated floodplain maps in Three Forks demonstrate that flood risk was previously underestimated, potentially devastating the local economy and sense of community.

The project will include a culvert crossing structure to carry water underneath a state highway before terminating into a natural side channel of the Jefferson River. Channel dimensions are anticipated to be 100-feet wide, 5-feet deep, with 3:1 side slopes.

"When the floodwater from an ice jam hit these channels, the water is diverted from Three Forks and back to the Jefferson River," City Treasurer and Flood Plain Administrator Kelly Smith said at a previous Council meeting.

The Council decided November 9 between two options for the project, choosing a shorter overall channel for a total cost of $5,054,0700. Smith told the governing body the shorter channel would get more floodwaters out and free up more land, but it is going to cost the City additional money for the proposed purchase of a $1.5 million easement from a landowner.

The Council also voted to move forward with applying for a FEMA Building, Resilient, Infrastructure & Communities (BRIC) Grant to help fund the project. Smith announced in August that the City had been turned down for the BRIC grant for $3,781,500 to help pay for a $5,042,0000 flood mitigation project. BRIC grants require a 25 percent match.

The governing body passed three letters of intent to apply for the grants as well as to move forward with the applications. 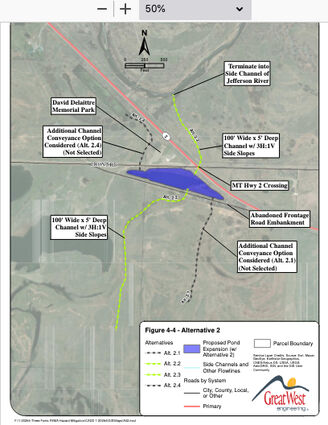 Recent floodplain analysis and mapping of the Madison and Jefferson Rivers in the vicinity of Three Forks indicate increased flood risk to the City of Three Forks and surrounding areas. The proposed floodplain mapping adds approximately 165 acres of floodplain within the City of Three Forks municipal boundary. Most of that area (154 acres) is classified as a floodway. Close to 300 structures were added to the floodplain, with approximately 74 percent of the added structures also within the floodway. Hydraulic modeling indicates the proposed mitigation project could significantly reduce the amount of floodplain area within Three Forks and ultimately reduce the risks and significant economic impacts to the community from a flooding event.