Numerous Accidents Reported After Storm, Drivers Should Prepare for Conditions 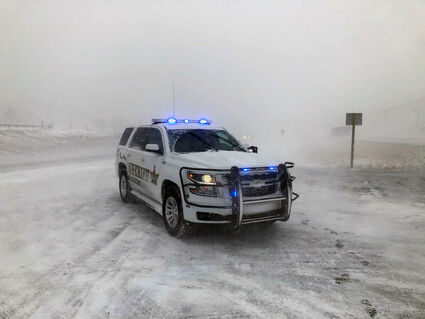 When one of the first snowstorms of the season hit last week, it was a busy two days for the Gallatin County Sheriff's Office.

According to Captain Matt Boxmeyer, from midnight on November 11 until the morning of November 12, the GCSO responded to a total of 58 accidents, 15 of them involving injuries and two involving people trapped in their vehicle.

Boxmeyer said the higher number of accidents is fairly common during the first few significant snowstorms of the season.

"Yesterday (November 11), we were battling people on the Interstate going at a higher speed. People were hitting bridge decks, and it is not uncommon to have multiple accidents in a couple of mile stretch," he said.

With last week's storm just the first of many on the way, Boxmeyer stressed the importance of Gallatin County residents having the proper tires for the inclement conditions.

"Make sure you have the right type of equipment on your vehicle and make sure you are giving yourself plenty of time to get wherever you are going," he said.

Earlier in the week, Montana Governor Greg Gianforte signed a proclamation recognizing November 8 to 14 as "Crash Responder Safety Week" in the Treasure State.

For Camille Bjorndal with the Willow Creek Volunteer Fire Department, drivers not getting over for emergency responders is something she sees far too often.

"A lot of time, I think it's that people don't really pay attention to what is going on until they are right at the scene. We have had a few times where we have had to jump out of the way of a vehicle," Bjorndal said.

Boxmeyer also discussed the importance of drivers moving over at the scene of an accident.

"It is really important to us. There have been many accidents across the United States and Montana involving emergency vehicles and authorized tow vehicles. About a month ago, we had a pretty close call where somebody didn't get over, hit their brakes, and almost slid into one of our cars, and we have had our vehicles hit before," said Boxmeyer. "We have our lights on for a reason. When we have our lights on and are pulled over, we have people outside the vehicle, and that's a really dangerous position for our deputies. Especially at night where visibility can be greatly reduced."