A trip to Shakey's?

When I was in grade school, Friday was always a big deal. Not only did it mean the end of the school week, but chances were also I would be going to what was and still is my favorite restaurant.

Around 6 p.m., we would make the short drive to Shakey's Pizza and often not leave for a couple of hours. For those not familiar with the pizza chain, there used to be about 500 restaurants in towns, both big and small. There was fun for the kids with a full arcade, and the adults could have a little fun with a full bar. Although my greasy hands probably touched every game they had about a thousand times, what I loved the best was their food. To this day, it is my favorite pizza, and what stole the show was their "Mojos," a breaded deep-fried potato that tastes like Heaven on earth.

When I was a little bit older, I used to go with my friends for their "bunch a lunch" buffet, and it was incredible how much pizza a bunch of teenagers could eat. We would pay around five bucks and wipe out the buffet. I'm probably sure they cringed when they saw us walk through the door because we were going to get way more than our money's worth.

I'll always remember my boss at the time Garry, telling me about how much damage he did at that buffet. I still think of it often because the two of us could eat enough to wipe out Vegas.

In the late 1990s, the company downsized, wiping out hundreds of its restaurants across the United States. They continued to operate a large number in California and emphasized the global market, especially in the Philippines.

I was saddened when the Shakey's closed in my hometown and the thought I may never have the opportunity for the pizza or Mojos. A few years later, I was visiting my sister in Los Angeles and decided to walk around while she was working. She lived in a great area, and after about a half-hour, I stumbled across a Shakey's.

I almost broke down in tears and immediately ordered a large pizza and large Mojo's. I preceded to eat all of it in about ten minutes and went back twice that trip.

I told quite a few friends about that trip, and they were all jealous. There was just something special about that place for all of us.

A few years later, I would move to Washington and found out there was a Shakey's in the Tri-City area and made trips as often as possible. It always tasted the same, and a quick trip down the Interstate could always make a bad day great in a matter of moments.

In 2018, I made a quick trip to Seattle, and my first stop was in Renton for Shakey's. I hadn't eaten all day by the time we rolled in around 2 p.m. and preceded to eat more than I have in my life. It was probably gross for everyone else to watch my gluttony, but I didn't care. I almost took my shirt off to eat because I knew I would make that much of a mess. 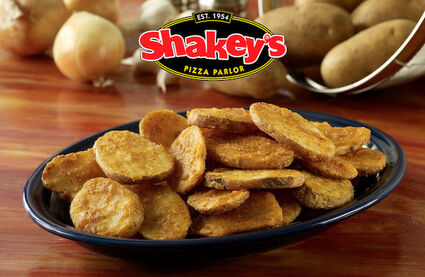 About a month ago, my younger sister traveled to Seattle for a Seahawks game, and one of her first stops was in Renton. She feels the same way I do about Shakey's, and I was thrilled for her. I was also a little jealous because it had been about three years.

At that moment, I decided when I have a little extra time on the weekend and the weather is cooperating, I'm going to leave at about 4 a.m. and drive to the Tri-Cities for the sole reason of going to Shakey's Pizza.

It is going to be an awful 14-hour round trip, but it will be worth it.

I'm not quite sure how much I'm going to eat, but it will probably be more than I should.

There isn't too much more I love then pizza and am lucky to be able to eat "The Moose" at Stageline in Three Forks, which if you haven't eaten, you need to ASAP. I also have this nostalgia of trying to get another trip down memory lane.

It will be well worth it.