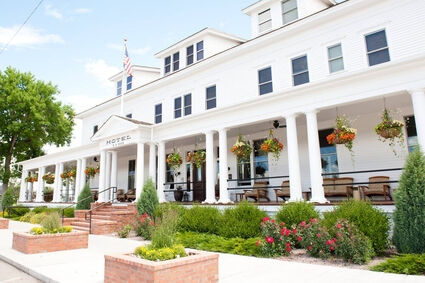 Pictured is the Facebook cover photo for the Sacajawea Hotel. A new book about the history of the hotel is now available.

Just in time for the holidays, a new book about the Sacajawea Hotel published by the Three Forks Area Historical Society will make a perfect gift for both current and former residents.

"The Sacajawea: The History of the Sacajawea Hotel in Three Forks, Montana" is now available at the hotel lobby or by contacting historical society members.

According to Pat Townsend of the TFAHS, they were approached by Sacajawea Hotel owners Dean and Hope Folkvord about putting together a book similar to ones they had viewed about hotels on the East coast. After agreeing to do the project, Townsend said they gauged the interest of society members, and those interested started planning about the book that would take over a year to complete.

Some of the members worked on writing, including Patrick Finnegan, whom Townsend praised for his work on the book, while others spent time conducting interviews and researching.

With such a rich history of the hotel that dates back to 1910, Townsend said when they were trying to figure out where to start, they decided to write the book from the perspective of the various owners of the building. She added they started the book with the origins of the hotel and a bit of background of the history of the Three Forks area and the importance of Sacajawea.

"We learned a lot. We all learned things we never knew about the 'Sac' and the people who owned it or worked there," Townsend said.

The research included a great deal of time going through old photos and newspaper clippings, and interviews with people associated with the hotel. 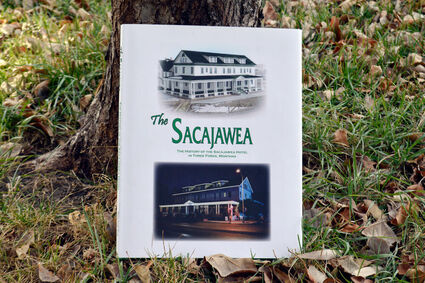 Pictured is the new book about the history of the Sacajawea Hotel in Three Forks. The book was published by the Three Forks Area Historical Society. The book is available in the hotel lobby or from society members.

"That was incredibly fascinating. All of us had a positive experience when we did the interviews and had them being very willing to talk about their connection to the 'Sac' and what they could offer," she said.

The cost of the book is a fitting $19.10, the same year the hotel was built, and Townsend was thrilled when she heard back from the printer that it would be completed in time for the holidays.

"We are ecstatic the book arrived for Christmas," said Townsend. "We just hope people like the work we put into it and the history that it talks about."

Along with Finnegan, the authors of the book included Townsend, Tyler Palmer, and Shane Hegar. The editors were Sorensen and Sandra Cutler. The design was and production was completed by Finnegan.