After missing a critical testing window in November, county election officials are urging Secretary of State Christi Jacobsen to delay a January rollout of Montana's new election system for the sake of election integrity. 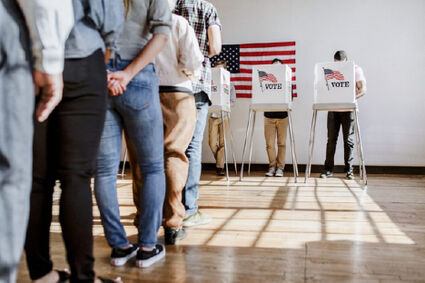 County election officials are once again expressing grave concerns about Montana's readiness to transition to a new election software system, even as Secretary of State Christi Jacobsen's office contemplates implementing that transition on Jan. 3, 2022.

In letters and emails sent to Jacobsen throughout this fall, a group of election administrators has repeatedly and explicitly said the proposed timeline for making the switch from the current Montana Votes system poses a threat to the integrity of next year's election. Montana Votes is used for a wide array of local election processes including registering voters, updating voter information and sending and receiving ballots.

After the transition, those processes would be handled using a new system called ElectMT, which Jacobsen's office and local officials have been developing in collaboration with South Dakota-based tech contractor BPro. According to five county election officials familiar with that development, ElectMT promises to be a significant improvement over the 15-year-old Montana Votes system. But due to insufficient data and testing of the new system to date, the same officials said they don't feel comfortable relying solely on ElectMT in 2022 given the size and complexity of federal elections and the fact that next June's federal primary overlaps with local school board elections in May.

"We do feel this system, it does have a lot of great functionality, and I think that it is going to be a great system once it's been fully developed, fully tested, has all the data fully converted," Ravalli County Clerk and Recorder Regina Plettenberg said. "We just don't want to rush it."

Plettenberg and Cascade County Clerk and Recorder Rina Moore reiterated the group's concerns in testimony before the Legislature's State Administration and Veterans' Affairs Interim Committee on Nov. 4. Montana Free Press contacted Jacobsen's office via email with a list of eight questions about the ElectMT switch, the existence of any contingency plans to deal with potential post-rollout problems, and the agency's vendor contract. In response, SOS Communications Director Richie Melby sent only this statement on Jacobsen's behalf:

"The ElectMT start date is ultimately a data-driven decision, which will be made by December 20 with transparency and for what is best to uphold election integrity in Montana to ensure our elections are secure. Project management is in place to review go-live criteria and test to ensure its readiness. I am grateful to our election officials and confident in achieving our shared goals."

Montana has been gradually working toward replacing its election system since April 2019, when then-Secretary of State Corey Stapleton first entered into a $2 million contract with BPro. The deal drew raised eyebrows almost immediately, with Rep. Geraldine Custer, R-Forsyth, and former Sen. Bryce Bennett, D-Missoula, raising questions about why Stapleton had awarded BPro a sole-source contract rather than open the project for bids from other prospective vendors. Local election officials also grew concerned with Stapleton's proposed timeline for the new software, which he initially planned to roll out in time for the 2020 election. Stapleton eventually relented, acknowledging that such a rush could put the integrity of Montana's election at risk and saying 2021 was a more realistic goal.

Local election officials temporarily set aside their role in developing the new system in 2020 in order to complete that year's federal election. They picked that work up again this year, with a team of 11 county officials from around the state providing feedback and assistance. That team, along with the SOS office and developers from KnowInk - a St. Louis-based election technology firm that acquired BPro in February 2021 - conducted a variety of focused test runs called "sprints" throughout the year.

The sprints were designed to ensure that ElectMT could adequately perform the various functions that county election officials will rely on it for, and to identify potential problems. Because state election administration laws differ, portions of the system have to be tailored to fit Montana's election structure, which underwent several significant changes during the Legislature this spring, including new photo ID requirements and ending voter registration at noon the Monday before Election Day.

According to Missoula County Elections Administrator Bradley Seaman, the system did not meet the level of performance required under the contract in any of the 14 sprints conducted. He added that any time a fix is made to the software, other portions of the system have to be double-checked to verify they haven't been impacted by those changes. Ultimately, Seaman has advocated strongly for a full test of the entire system prior to its rollout to confirm it can successfully do everything it's designed to do.

"There needs to be a full end-to-end testing after all development is completed," Seaman said. "Now, ideally, before you would try to test from one end of the database to the other, you would have run a parallel test as well. And that's the biggest concern from election administrators, is that we knew there would be a resource draw coming up in the election, we knew that there would be a resource draw both for the secretary of state and elections administrators, and the development criteria simply wasn't being met throughout the entirety of the project."

All the work done by the county elections team, SOS staff and KnowInk was supposed to culminate this month with exactly that parallel test. Several county officials planned to conduct their 2021 municipal elections using Montana Votes and ElectMT separately and simultaneously, in order to compare the results generated with the new system to those of the old one. Lewis and Clark County elections department supervisor Audrey McCue went so far as to hire additional election staff this fall specifically for the parallel test.

However, Seaman and others told MTFP, ElectMT was not ready in time to conduct that testing, despite several efforts to clarify the situation with SOS staff.

"It didn't happen because the system isn't ready yet," Moore told MTFP. "It's still not ready."

Teton County Clerk and Recorder Paula Jaconetty regards the inability to conduct a parallel test this month as a significant missed opportunity. She said she had a "perfect-sized" election to run through both Montana Votes and ElectMT in the town of Dutton, with just 200 municipal ballots. Such a test would have been simple and easy to manage, Jaconetty said, while also giving her the information and experience needed to feel comfortable switching from a familiar, trusted system.

"I truly believe that we need to be able to have the opportunity to parallel trust, to have a full election cycle and be able to parallel it with our current Montana Votes," Jaconetty said. "I think that is just instrumental to make sure that everything is correct, that we've worked out the bugs or, even if we haven't, that we can fix those bugs before we are totally dependent on ElectMT."

Other election officials echoed Jaconetty's concern that without such tested results, they don't feel confident transitioning away from Montana Votes. Moore said that the SOS office has proposed to run an end-to-end test of the system during a two-week stretch in December, which she and other county officials said would pull them away from other important duties. Their work so far on the project - at times involving multiple hours-long meetings in a single week - has been strictly voluntary, without compensation from the state.

Once the testing is complete, election officials and election staff in other counties will still have to undergo additional training with ElectMT. Carter County Clerk and Recorder Pam Castleberry, who has not been involved in developing the new system, said she has gone to one training already. But, she added, she hasn't had much spare time to familiarize herself with the new system, which she does have access to now. While Castleberry is confident that her county's small size would make it easier for her to manually check any issues that arise as a result of an ElectMT rollout next year, the weeks following the June primary are already a busy time for her and her deputy, the only two staff in her office.

"We do all the budgeting [for the county], we do all the financial reporting, prepare the budget for the commissioners for review," Castleberry said. "I'm not going to lie to you, we're busy."

Despite their concerns, election officials acknowledge the final decision is not theirs to make, as the SOS office is the owner of the system.

In voicing their reservations, Seaman and others have pointed out that Montana is already struggling with questions and suspicions about the integrity of its election process. One group has even leveled allegations of irregularities in Missoula County's 2020 election, and several Republican lawmakers belonging to that group pushed this fall for the Legislature to form a special select committee to investigate election security in Montana. Election officials in some counties responded by opening their municipal elections in November to public tours, committing additional time and resources to counter a national voting fraud narrative.

One of Seaman's fears in rushing to implement ElectMT is that any problems with the system - registering voters, printing ballot envelope labels, voiding ballots sent to a voters' former address after they've moved - could fuel continued doubt in the process. He likened the new election system to a new jumbo airliner. You could test fly it to ensure all the new technology is in working order, he said, or you could load it up with passengers without testing it.

"We're not going to lose lives over this," Seaman said of the new system. "But we are already having issues with some people in an echo chamber not believing that their vote will count. And if we have issues with a new voter database and they are real issues, we will have that loss of confidence, that public perception of how the process works, amplified."