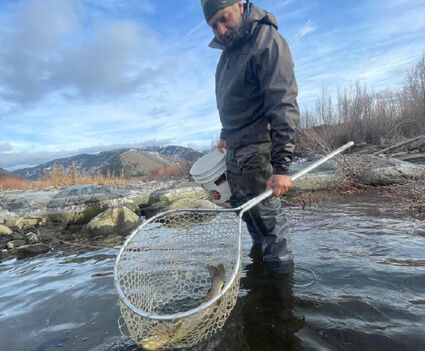 Concerned citizens turned out to the upper Madison River en masse last Wednesday to rescue fish stranded in shallow pools and side channels following a malfunction of Hebgen Dam. Montana Fish, Wildlife and Parks said the impact to the fishery is still unknown. Credit: Joe Moore

Near-seasonal flows to the Madison River, one of Montana's most popular fisheries, have been restored following a late-night repair last Thursday to Hebgen Dam's outflow gate.

NorthWestern Energy posted on Twitter at 12:33 a.m. Thursday morning that crews repaired Hebgen Dam's outflow gate just before midnight Wednesday and "the water in the river is rising."

Early Tuesday morning, flows to the Madison were cut in half when the dam's outflow gate malfunctioned, killing trout that were stranded in shallow parts of the swiftly dropping river. Hebgen Dam operator NorthWestern Energy opened the spillway to provide a small boost to the river while it waited for Anaconda Foundry Fabrication Company to build a replacement part, but the boost in volume was minimal because drought conditions have suppressed water levels statewide, including in Hebgen Reservoir.

The rapid dewatering of the river - it dropped from about 650 cubic feet per second to less than 200 cfs in the early morning hours of Dec. 30 - inspired concerned citizens to turn out en masse Wednesday to help Montana Fish, Wildlife and Parks move stranded fish into deeper sections of the river.

"Today, six crews comprised of FWP staff and many volunteers walked portions of the upper Madison River from Eagle's Nest upstream to Hebgen Dam," FWP wrote in a Wednesday afternoon Facebook post. "They used electrofishing equipment and nets to capture fish that were stranded in shallow, isolated pools and move them to the main river channel."

"They observed many surviving fish, including sculpin and a few trout of various sizes. Relatively few dead trout were observed, and most fish were salvaged between Quake Lake and Hebgen Dam," the post continued. FWP also said that "lasting impacts to the fishery are still unknown" and advised the public to avoid walking in the riverbed to protect trout redds - spawning nests - that are still viable.

NorthWestern Energy thanked partner agencies and volunteers for their response in a Thursday morning press release.

"This successful repair [of the outflow gate] was the culmination of outstanding effort by many NorthWestern Energy employees and partner contractors," Jeremy Clotfelter, NorthWestern Energy's director of hydro operations, said. "From the time this issue was identified, work was underway without stoppage until the river flows were restored." 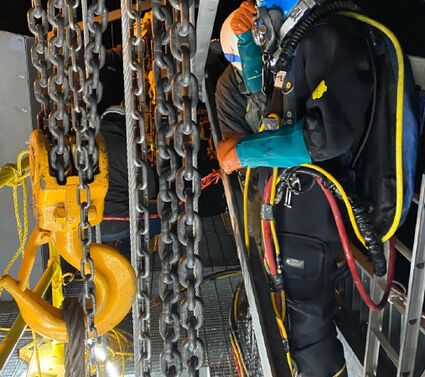 "Our focus now turns to analysis of the failure and impacts to the river fishery. While we know what failed on the gate, we need to identify 'how' and 'why' it failed to best establish corrective actions that would prevent a similar failure in the future," Clotfelter said.

It's unclear if NorthWestern will be subject to regulatory actions by state or federal agencies as a result of the gate malfunction. Clotfelter said federal regulators and the company's dam safety engineers inspected the dam and its outflow gates earlier this year and no issues were identified. He also said flows never dropped below the minimum 150 cfs threshold required by the license NorthWestern Energy holds from the Federal Energy Regulatory Commission for its dams on the Missouri and Madison rivers.