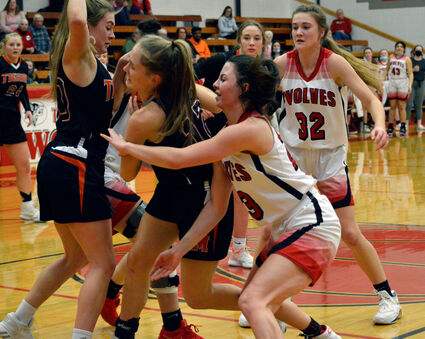 When the Three Forks High School girls basketball team opens the season this week at a tournament in Shelby, they will do so with four seniors returning leading the way.

Head Coach Mike Sauvageau is also excited about his team's depth in the 2021-22 season.

After the first few weeks of practice, Sauvageau feels things have been going great, and he has liked what he has seen from the Wolves.

"They have had great enthusiasm and great work ethic. The team attitude has been awesome, and it has been really fun so far," he said.

The four seniors returning for the team are Jayden Woodland, Lily Jones, Jasmyn Murphy, and Ashlyn Swenson, all of which Sauvageau said have three years of varsity experience, with a lot of that coming from last year.

"Hopefully, that transfers into some success this year. They've been doing a great job so far. Their leadership has improved immensely, and they are excited to get the chance to play someone different than themselves," he said.

"With the makeup of our team, the depth should be a plus in the long run. A lot of these girls are interchangeable, so we can see who is having a good night and who is not, and go from there," said Sauvageau. "Overall, we will be a little bit better than last year with that year of experience, but it all comes down to putting the ball in the basket. Last year, we had a hard time and would go six or seven minutes without scoring. If we can score more consistently, I think we will have a much better season."

With a game Friday against Fairfield, and a Saturday matchup against Malta, Sauvageau knows his team will have a tough task to open the season.

"We are stepping into the fire from the get-go with two of the best teams from the north. Going on the road to play two of the top teams in Class B is exciting, but we've got a hard task in front of us," he said.