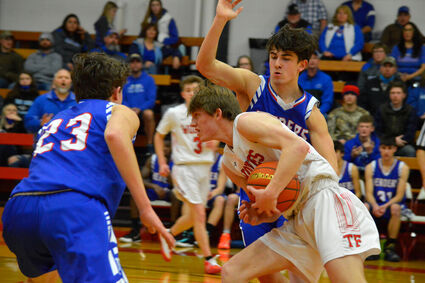 Senior Owen Long and the Wolves will open the season this week at a tournament in Shelby. Three Forks is scheduled to play Fairfield and Malta. File photo

Since taking over the program in 2016, Three Forks High School boys basketball coach Terry Hauser has had a plethora of talented players that helped lead the way to three trips to the Class B State Tournament. Always excited for the start of the basketball season, Hauser said he is even more so this year because of the talent the program has at all levels, including the sub-varsity teams.

"Might be the most talent from top to bottom that I've had since I started coaching here. It's been a great two weeks of practice, and the energy level has been extremely high. It's been a great start, and hopefully, they stay hungry," Hauser said.

When the Wolves open the season Friday in Shelby at Noon against Fairfield, Hauser said they would do so with a lot of experience and what he described as a loaded senior class.

Starters since their sophomore seasons, Hauser said seniors Owen Long and Austin Allen have five years' experience in his program because they were managers their eighth-grade year. Three Forks will also return Jacob Buchignani, who started the entirety of the 2020-21 campaign.

"Jacob has improved so much, mainly his confidence in his game, and he just seems much more relaxed," Hauser said.

Along with six returning players from last year's team that advanced to the Southern B Divisional Tournament, the Wolves will also welcome new high-level players in Finn Tesoro and Mikey O'Dell. Tesoro was a key member of last season's Manhattan state runner-up team, and Mikey O'Dell started last year at Butte High School.

"Mikey and Finn have settled in nicely. They get along very well with everyone on the team, and it's so impressive how well they already mesh with the other seniors on the team," said Hauser. "Finn is going to help handle the ball, taking some pressure off of Jacob and can shoot from anywhere on the floor, which will help spread the defense. Mikey is one of those guys that has no flaws in his game. He can shoot, dribble, rebound, and might be our best defender on the team. I was amazed at how well we played this summer with little practice and experience as a team."

With the Friday matchup against the 2020 co-state champs, and a Saturday game against Malta at 4:30 p.m., Hauser wants his team to play hard, together, and smart.

"If we do that especially early in the season, we will put ourselves in a great position to win some games. Don't beat ourselves with too many mental mistakes and execute on offense. We have a ton of guys that can score, so I have stressed ball movement giving up a decent shot for a great shot. We need to defend if we can get stops, then we can really take advantage of our talent and athleticism and get out and run on teams," Hauser said.