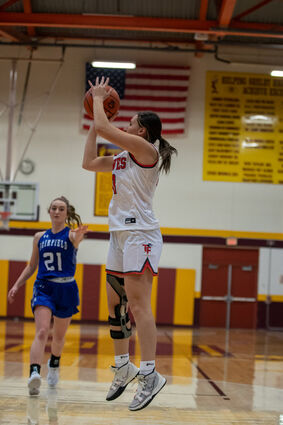 It was a tremendous opening game of the season for the Three Forks High School girls basketball team as a solid defensive effort led the way in a 35-26 win over perennial Class B power Fairfield.

Leading 15-12 at halftime at the game played at a tournament in Shelby, the Wolves would outscore the Eagles 15-7 in the third on their way to the impressive victory.

Head Coach Mike Sauvageau was pleased with the effort from his squad.

"We came out and did a good job. We definitely controlled the tempo," he said.

Three Forks would fall the next 52-37 to Malta, a team Sauvageau said played at state last year and returned all of their key players.

Sauvageau said the game down to post play with a Malta player getting 23 points. He added his team also missed a few "bunnies" that would have made the game closer.

After a game Tuesday in Twin Bridges, Three Forks will be on the road Thursday at Big Timber. They will open the home season Friday against Whitehall.

Sauvageau said the opening part of their schedule would be a test for his team, but in the end, it will only make them better.