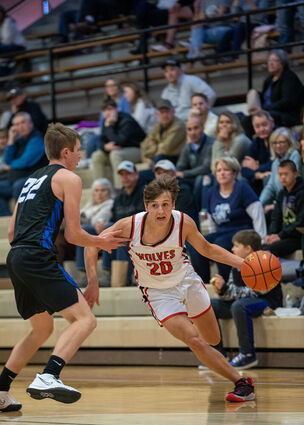 Finn Tesoro gets by his defender in a 72-9 season opening win over Fairfield. Photo by Trisha Jones Photography

It's so far, so good for the Three Forks High School boys basketball team.

Opening their season at a tournament in Shelby, the Wolves picked up a 72-69 win last Friday over Fairfield and a 59-46 victory Saturday over Malta.

In the hard-fought win Friday featuring two of the best programs in Class B, Head Coach Terry Hauser was elated his team had five guys in double figures and another with seven points.

"That what you want to see when you look in the book. Different guys are scoring, not just one or two. That's what great teams do. It's easy to plan for one of two guys, but really tough when your top six are all capable of scoring," said Hauser. "We moved the ball well and played unselfishly. We still have a few things we need to improve on. We had chances to put the game away and couldn't close it out because we were undisciplined and turned it over and missed screw throws down the stretch. We will keep improving in those areas."

Owen Long led the team with 18 points, Mikey O'Dell finished with 15, Austin Allen had 12, Shane Williams and Finn Tesoro had 10, and Jacob Buchignani finished with seven.

Down 24-21 at half Saturday, the Wolves came out strong in the second half outscoring Malta 22-12 in the third quarter led by the strong play of Owen Long, who finished with a game-high 27 points.

"We started out really slow Saturday, and Owen really did a good job of putting us on his back on the offensive end. He had a terrific weekend, and he's really starting to figure out how to be a leader of our team! They threw a zone at us, which took us by surprise because they played man defense in the games we watched. Have to give their coaches credit for their game plan because it slowed us down. We made some adjustments at halftime and started to figure out how to attack the zone," Hauser said.

It will be a busy week for Three Forks, with road games Tuesday at Twin Bridges and Thursday at Big Timber, followed by a home game Friday against Whitehall.