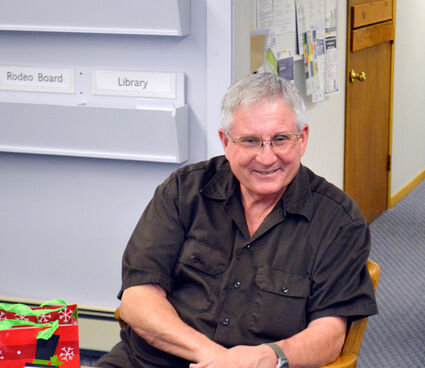 New Three Forks Mayor Randy Johnston visits with guests prior to Christmas at City Hall. Johnston was being honored with a retirement part for his nearly 31 years working for the municipality. His first official day as Mayor was Monday. Voice photo by Jack H. Smith

In December, the City of Three Forks celebrated the retirement of longtime public works employee Randy Johnston. After nearly 31 years with the city, Johnston is not entirely done playing an integral role for the municipality.

Just hours after his retirement, Johnston was sworn in as Mayor, a position he officially started on January 3.

As guests visited Johnston during the party, he said that he started with the city after a long tenure working at his uncle's grocery store. According to Johnston, he has always had the same job of running the city water and sewer and other tasks like mowing, but it is far different than when he started with new regulations.

Since starting school in Three Forks in 1960, Johnston said he married his high school sweetheart, had three kids who went to school here, and two grandkids currently attending school.

He has enjoyed being able to work with the residents of Three Forks.

"The thing of it is, this is my hometown, and I know everybody," Johnston said.

While one chapter of his time with the city is done, Johnston is excited about the future.

"We have so many things coming including the new test wells, and maybe down the road we can get this flood plain issue figured out," he said.

Johnston knows he will be busy with the challenges of growth, water, and the flood plain.

"I just still wanted to be involved instead of sitting at home," he said.