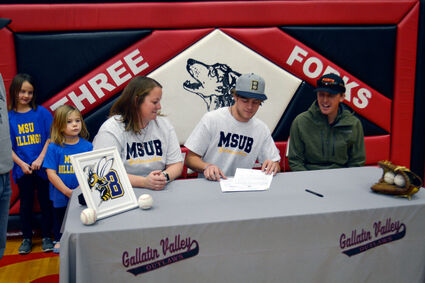 Before the Christmas break, Shively signed a letter of intent to play at Montana State University Billings. In August, Shively was an integral part of an Outlaw squad that won the Montana Class A American Legion State Championship and finished second at the Northwest A Regional in Alaska. Shively threw a perfect game in June against Mead (Spokane).

Shortly after signing his letter of intent in the Three Forks High School gym, Shively said he was excited about the opportunity.

"There has been a lot of hard work to get where I am at today," he said.

Along with what he described as a strong work ethic from members of the program that won 2015, 2016, 2018, and 2018 Great Northwest Athletic Conference Championships, Shively was impressed with the tight-knit atmosphere.

After a successful tenure as a starting pitcher for the Outlaws, Shively plans on continuing in that role for the Yellowjackets.