How does the wildlife cross the road?

A prominent road ecologist says Montana is 'stagnant' on wildlife crossing initiatives. Could a $350 million federal pilot program turn that around? 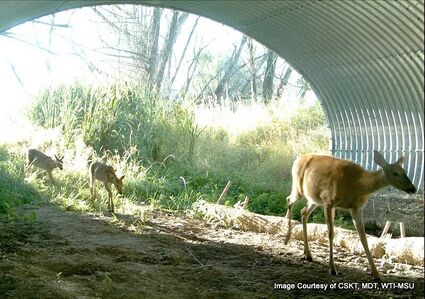 Road ecologists say wildlife crossings are one of the best ways to reduce wildlife-vehicles collisions and mitigate one of the most significant human impacts on ecosystems. This three-part series examines Montana's approach to crossing initiatives as the federal government prepares to implement a $350 million pilot project - the largest investment of its kind in U.S. history.

During a Nov. 17 hearing, Martha Williams answered dozens of questions you'd expect an incoming director of the U.S. Fish and Wildlife Service to field from the Congressional committee considering her nomination. After she spoke about a life "steeped in conservation," the Maryland farm she grew up on and lessons she learned at the helm of Montana's Fish, Wildlife and Parks Department, members of the Senate Environment and Public Works Committee grilled Williams about climate change, hunting on wildlife refuges and the USFWS-administered Endangered Species Act.

Then committee chair Tom Carper, D-Delaware, presented her with an unexpected question: How had Williams' experience with wildlife crossings in Montana prepared her to help implement a $350 million federal pilot program that aims to reduce wildlife-vehicle collisions and increase habitat connectivity?

Williams described the program, which was included in the $1.2 trillion infrastructure package Congress passed Nov. 5, as "a big moment ... a long time coming." Adding some levity to the conversation, she described a video of a person sleeping in a wildlife underpass on the Flathead Reservation, oblivious to a grizzly bear sauntering by. Then she circled back to the intersection of transportation and wildlife conservation.

"I can't - we can't - underestimate the importance of these crossings for [motorist] safety, and for wildlife," she said. "Experience shows that species use them, and they help with safety."

Williams was likely referencing photos that circulated earlier this year of a near-encounter in a culvert beneath U.S. Highway 93. Three photos, snapped by a motion-sensitive game camera at one-second intervals, show a bear walking past a person lying next to a backpack, looking over its shoulder at the blanket-wrapped form not 30 feet away, and ambling on.

Like 38 other crossing structures on the Flathead Reservation, that culvert was installed by the Montana Department of Transportation in the mid-to-late 2000s, a high point in the state's efforts to make its transportation system more wildlife-friendly. When the project was underway, Montana and the Confederated Salish and Kootenai Tribes - which had insisted that MDT mitigate wildlife impacts on tribal land as part of a highway-widening project -  were lauded by environmental groups for being responsive to the many ways roads impede wildlife movement, restricting animals' access to food, mates, new territory, and safe harbor from wildfire, flooding and drought.

But Marcel Huijser, a research ecologist with Montana State University's Western Transportation Institute, says the state has become "quite stagnant" in the past decade, and Montana is rarely mentioned in recent stories about wildlife crossings. Projects in Nevada, Wyoming, Washington and California are more likely to make headlines. Now, the infrastructure bill's new $350 million wildlife crossings allocation - the largest investment of its kind in the country's history - has ecologists like Huijser wondering if the state will renew its efforts to help wildlife safely cross Montana's roadways.

ONCE A LEADER, NOW A LAGGER

Montana roads currently contain 122 wildlife accommodations - measures designed to mitigate the impacts of roadways and traffic on wildlife - according to MDT Environmental Services Bureau Chief Tom Martin. He said most of those are underpasses, but others include exclusionary fences to deter wildlife from crossing a particular stretch of road and vegetation removal to make wildlife more visible to motorists.

Eighty-one of the state's 122 wildlife accommodations are located on U.S. Highway 93, which traverses western Montana from Eureka to Sula. About half of the Highway 93 projects are located on the Flathead Reservation, due in no small part to the Confederated Salish and Kootenai Tribes' insistence upon them. Back in the 1990s, tribal leaders told MDT they wouldn't grant easements required for its highway-widening project unless MDT reduced the roadway's impact on wildlife. With mediation help from the Federal Highway Administration the two sides reached an agreement in 2000 premised on the idea that "the road is a visitor and ... it should respond to and be respectful of the land and the Spirit of Place." Researchers evaluated potential crossing locations based on wildlife crash frequency, local knowledge of wildlife movements and land availability for crossing structures,  and MDT started installing the 39 structures (mostly culvert underpasses) in 2005. The total cost of the crossings topped $21 million, which was primarily funded with Federal Highway Administration dollars allocated to MDT. A decade later, a half-dozen studies have been done on their efficacy.

One study based on 15 underpasses found that 24 species of animal used the crossings during the study period. Huijser and his co-authors found that deer were most likely to use them, followed by black bears and coyotes, but other animals including bobcats, ring-necked pheasants and racoons used them, too. Another study conducted by Huijser found that the most effective crossings on Highway 93 reduced auto crashes with wildlife by nearly 100%, and the least effective ones (those lacking optimal placement, design and fencing to encourage animals to use them) improved wildlife-vehicle crashes by about 50%.

Highway 93 is an outlier, though. Elsewhere, Montana has generally taken a more transportation-centric approach to mitigating roads' impacts on wildlife, and it's not a great deal for animals - or motorists faced with expensive vehicle repairs. MDT's current process looks something like this, Martin said: MDT identifies a section of road that needs improvement, whether that means repaving it, widening it, or replacing a bridge or guardrail, and staff biologists evaluate the project's potential to negatively impact wildlife. The department then applies a cost-benefit analysis to a range of potential mitigation measures. Some are implemented and others aren't.

The most effective measures, from a collision-prevention and habitat-connectivity perspective, also tend to carry the highest price tags, which helps explain why few have been built in the state in the past decade. Building a bridge over a highway sturdy enough to accommodate the soil and vegetation that encourage animals to use it is a spendy proposition, Martin says. Overpasses cost between $1 million and $7 million, and underpasses range from $250,000 to $600,000. To work well, researchers are learning, the structures often require 8-foot fences up to 3 miles long to steer wildlife into the crossings, and those fences come with a price tag, too - about $50,000 per mile.

Martin said MDT's ability to install wildlife crossings in the past decade has been limited by the state's funding model. The vast majority of Montana's highway improvement dollars come from federal coffers, and the remainder, about 13%, comes from the state's gasoline tax, Martin said. As a result, MDT's strategy has been to prioritize projects that align closely with federal funding opportunities, which have tended to prioritize public safety concerns over wildlife. Wildlife-vehicle crashes in Montana may be frequent - Montana is second only to West Virginia for the likelihood a driver will hit an animal, according to data collected by insurance company State Farm -  but they're rarely fatal, for people anyway.

"The more severe the safety [concern], the easier it is to fund a project," Martin said. "They get precedence."

What gets road ecologists like Rob Ament, Huijser's colleague at the Western Transportation Institute, so excited about the new allocation for wildlife crossings in Congress' infrastructure package is the fact that applicants like cities, counties, states, and tribes won't have to compete for funding with bridges that need to be replaced or interstates that need resurfacing.

"That's why I think the new bill is a watershed [moment]," Ament said.

Huijser says that apart from public safety, there are plenty of reasons, economic and otherwise, to invest in wildlife crossings. Although crossing structures are expensive, Ament said the investment pencils out when transportation planners consider the costs associated with crashes in high-collision zones. (Between vehicle towing and repair, medical costs, carcass pick-up and the animal's estimated value alive, the average deer collision costs more than $6,700, and larger animals result in higher costs, according to a 2008 report to Congress.)

From a biological perspective, a paper Huijser co-authored on Highway 93's crossing structures describes roads as "one of the largest, most direct impacts humans have on ecosystems." Roads and associated rights-of-way degrade potential wildlife habitat, disturb soil and hydrology, invite colonization by invasive species and can contribute to inbreeding, which has negative consequences for a species' genetic health. Crossings can't mitigate all of those impacts, but Huijser  says they're one of the best tools transportation planners have, and he'd like to see Montana doing more.

"With some exceptions - but they are really quite old - Montana has been quite stagnant" on the wildlife-crossing front, he said. "Given the size of our state, the natural resources we have, I would have expected us to be doing more over the last decade."

Part II of this series will focus on a neighboring state that has established itself as a leader in wildlife crossing initiatives.