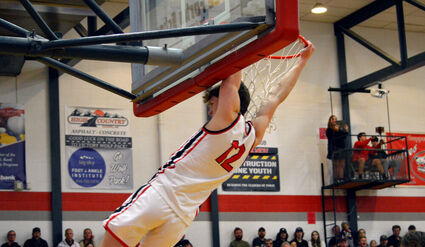 Pictured is Owen Long after one of two first quarter dunks last Friday against Manhattan. Voice photo by Melissa Jenkins

During a 6-0 start before Christmas break, Three Forks High School boys basketball Head Coach Terry Hauser praised his team's defensive play. The intensity on defense was once again prevalent in their return to the court last week, with the Wolves (8-0, 5-0 5B) picking up a dominant 70-49 home win over Manhattan and a workmanlike 59-49 road victory Saturday at Townsend.

Following the victory Friday, Hauser said he could not have scripted the start to the game in which Three Forks took a massive 24-6 lead at the end of the first quarter and 45-21 advantage into halftime.

Hauser said he was a little nervous with the first game coming back after the break because the energy wasn't as high as usual as practice.

"I was very happy with the energy. If we can defend like that every night and hold good teams to under 50, we will be tough to beat.

Three Forks was led in scoring by senior Owen Long with 15, 10 of which came early in the first with two dunks and two three-pointers. 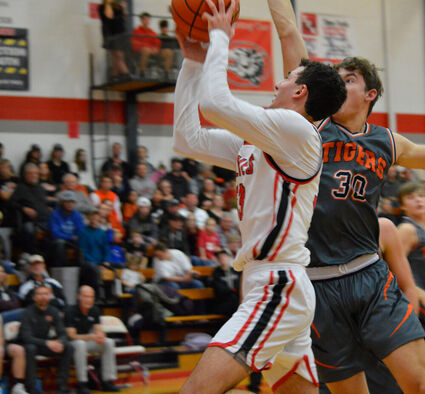 Mikey O'Dell goes up for the shot against the Tigers. Voice photo by Melissa Jenkins

Sophomore Shane Williams also had a big night for Three Forks with 14. Hauser lauded the play so far this season from the sophomore standout.

Allen had a monster night against Townsend, leading the team with 19. Tesoro also had a big game with 16, Williams had seven, Long had six, O'Dell finished with five, Buchignani had four, and Collin Stone added two points.

Three Forks will be on the road Friday for a rivalry matchup against Manhattan Christian and at home Saturday against Class A East Helena.