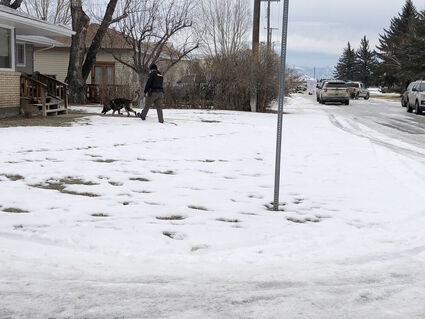 A K-9 unit searches near the scene of a double homicide in Three Forks. Voice photo by Melissa Jenkins

The Gallatin County Sheriff's Office has released the victims' names as Brendan Estabrook of Three Forks and Chase Estabrook of Butte.

Norman, of Three Forks, was appeared Tuesday in Gallatin County Justice Court where his bond was set at $1 million.

According to court documents, the Gallatin County Dispatch received a report of two people suffering from gunshot wounds in the area of 6th Ave. E. and E. Ash Street at 3:28 a.m., and later received a second call where the caller said they believed both victims were deceased due to their wounds. After responding to the scene, deputies were informed a male named "Zac" might have been responsible for the shooting and identified three witnesses who were still at the scene.

The first witness, who is a bartender at the Sacajawea Bar, told investigators the two victims were at the bar earlier in the evening and they all agreed to go a residence after closing. After finishing his duties at the bar around 3 a.m., the first witness said he drove to a residence and observed "Zac" arguing with Brendan and Chase Estabrook. The witness told deputies he observed a physical altercation between Norman and the victims that spilled out into the driveway. The witness stated he believed the fight had ended when Norman walked away from the residence, followed by the victims. According to the charging documents, the first witness then heard a "commotion" and observed more fighting near the previously mentioned intersection. As he approached the fighting, the witness stated that he heard approximately five- or six-gunshots, followed by a few more gunshots after a brief pause. The witness observed Norman fleeing the scene while the two victims were lying on the ground.

The witness recognized Norman as a regular customer at the bar and returned to the establishment with Gallatin County Sheriff Detective Mike Emens. The witness provided Emens with a drink receipt indicating Norman used a credit card using the name of Zachary E. Norman. The two other witnesses told detectives that Norman began arguing with the victims and that escalated into a physical altercation. Both witnesses stated they heard gunshots or loud noises and subsequently discovered Brendan and Chase Estabrook lying on the ground with what appeared to be multiple gunshot wounds.

The affidavit states a Dodge Charger registered to Norman's father was parked in the driveway at the residence.

In the affidavit, Emens states Norman was subsequently contacted and detained at his residence and then transported to the Gallatin County Law and Justice Center, and due to the circumstances, it would be determined his residence would be secured pending the application of a search warrant. During a security sweep of the home, law enforcement observed a black Glock handgun in plastic inside the waistband holder next to a water heater in the closet. Law enforcement also found wet clothing in a bathtub that appeared to match clothing descriptions of Norman provided by witnesses. Norman told detectives he had been wearing blue jeans, a dark "weatherproof" sweatshirt, and Timberland hiking boots.

In a Mirandized interview, Emens states Norman first claimed he and a friend went to the bar the previous night from dinner and would later go to Teaser's Gentleman's Club for a short period.

According to the documents, Norman then claimed the next thing he remembered was being woken up by his father, who informed him law enforcement needed to speak with him. Norman told law enforcement he usually carries a Glock 19 9mm handgun concealed on his person in an inside-the-waistband holster, and he always has a cartridge in the chamber and a second magazine on his person. 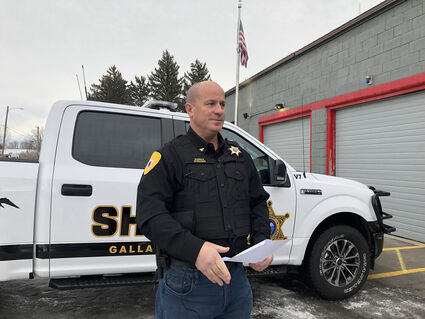 The documents state Norman claimed he did not know where the handgun currently was or if he was carrying it the previous night or early morning. According to the affidavit, Norman provided inconsistent statements throughout the interview, was evasive and claimed he could not remember any of the events.

Emens states in the affidavit that Norman later admitted carrying his handgun concealed when he went to the Sacajawea Bar from 1-2 a.m., he did remember more of the events from the night and that he was at the residence. Norman's father told law enforcement officials he woke up at some point early in the morning and that his son was in his bedroom saying "unintelligible" things.

The documents reported detectives found a wet sweater in the bathtub that appeared to have been washed. Jeans, Timberland hiking boots, and bleach were also found near Norman's room. Ammunition found in the handgun at Norman's residence appeared to match the sent casings found at the crime scene.