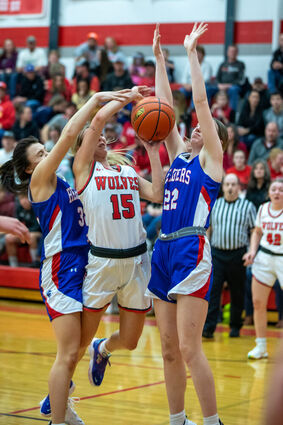 Jayden Woodland goes up for the shot in a 48-42 win over Big Timber. Photo by Trisha Jones Photography

It was a phenomenal night last Friday for the Three Forks High School girls basketball team.

Playing against defending state champion and fifth-ranked Big Timber, the Wolves came out of the gates strong and willed their way to a 48-42 victory.

Head Coach Mike Sauvageau said it was very exciting to see the smiles from the players after the win. He added everyone who played contributed to the win. 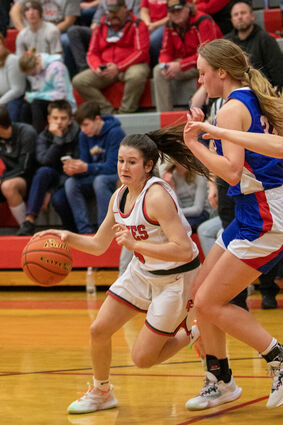 Tanaya Hauser had eight points in the win over Big Timber. Photo by Trisha Jones Photography.

It was a huge night for senior Jayden Woodland, who finished with 20 points. Senior Ashlyn Swenson was also in double figures with 10, freshman Tanaya Hauser and senior Jasmyn Murphy had great nights, scoring eight, and senior Lily Jones added two.

One night later, Three Forks would fall 46-40 at Columbus.

Murphy led the team with nine, Woodland and Swenson had eight, Jones had five, Fallon Page finished with four, Hauser had three, Brianna Warren finished with two, and Addie Pestel added one.

Sauvageau said his team was coming off an emotional victory but was able to keep the game close.

Three Forks will be on the road Thursday at Whitehall and host top-ranked and undefeated Jefferson High School Saturday. Sauvageau expects a tough battle Thursday and said on Saturday they will need to put all their cards on the table like they did against Big Timber.