The program was a carrot to complement the stick of reduced unemployment benefits, offering $1,200 one-time payments to workers who left unemployment for steady jobs. 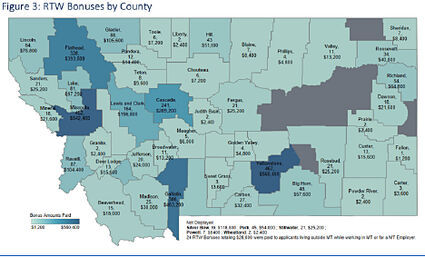 Gov. Greg Gianforte's Return to Work bonus program, announced last year as he scaled back expanded pandemic unemployment benefits, ultimately paid about one-fourth as many bonuses as the state initially funded, according to a new post-program report from the state Department of Labor and Industry.

The program delivered $1,200 payments to workers who were on the state's unemployment rolls as of May 1, 2021, and subsequently held new jobs for at least four weeks. It ultimately paid bonuses to 3,054 workers, spending $3.7 million of the state's American Rescue Plan Act funding. The remainder of the program's $15 million allocation will be returned to the pool available for other economic stimulus initiatives.

In a release Wednesday, the state labor department said the report highlights the program's effectiveness.

"Both workers and employers benefited from the program's success," labor commissioner Laurie Esau said. "Today, just a few months after the program's conclusion, more Montanans are working than ever before and Montana's unemployment rate is at an all-time low."

Montana's seasonally adjusted unemployment rate, 2.5% as of December, is substantially lower than the national figure of 3.9% and well below the 4-6% range traditionally considered "full employment" by economists. Tight labor markets mean it's generally hard for employers to find workers, which drives up wages and create inflation as businesses adjust their prices accordingly.

The state's workforce has grown in part because the overall state population has increased with in-migration during the pandemic. Montana's labor force participation rate, the percentage of civilian adults who are either working or looking for work, remains roughly a percentage point below pre-pandemic levels, according to the U.S. Bureau of Labor Statistics.

"Ending federal supplemental unemployment benefits and offering return-to-work bonuses have been effective, successful tools to get Montanans back in the workforce," Gianforte Press Secretary Brooke Stroyke said in an email. She also noted that the state has other initiatives aimed at bolstering Montana's workforce, such as recruiting incentives for nurses and efforts to promote trades education.

At a presentation before a legislative committee Jan. 27, labor department chief economist Barb Wagner said that even with more workers than ever in Montana's labor force, businesses are still struggling with staffing issues - because almost every available worker is already working.

Wagner also said the lagging workforce participation rate appears to be driven by a decrease in participation by workers under the age of 25, an age bracket where people are often in school, and the state's aging population, which means more would-be workers at retirement age.

When the return-to-work bonus program and rollback of expanded benefits were announced last year, the Gianforte administration said it was worried that expanded pandemic-era unemployment benefits were discouraging out-of-work Montanans from rejoining the workforce.

"Incentives matter, and the vast expansion of federal unemployment benefits is now doing more harm than good," Gianforte said in a release at the time. "We need to incentivize Montanans to reenter the workforce."

The unemployment benefits program is essentially a state-administered insurance program that collects contributions from most employers and pays workers who have been laid off or had their hours cut a portion of their former salaries. Under longtime rules, unemployment benefit recipients are required to actively look for work, but federal COVID relief legislation gave the state the flexibility to waive that requirement, increase weekly payments, and let workers stay on unemployment rolls beyond 13 weeks.

Gianforte, a Republican, was the first governor in the nation to announce an end to the pandemic-era unemployment benefits. The move was met with criticism from Democrats, who expressed concern about inflicting pain on people who had been relying on the expanded assistance.

The return-to-work program was a carrot designed to complement the stick of reduced unemployment benefits, offering the $1,200 one-time payments to workers who left unemployment for steady jobs.

While the labor department's report estimates that about 24,000 Montanans were receiving unemployment benefits and potentially eligible for the bonuses, it has been clear for months that the return-to-work program wouldn't attract the participation state officials had originally budgeted for. They initially allocated $15 million to the program, enough to provide bonuses to more than 12,000 workers.

Instead, the department's new report says, 6,175 people applied for the program before a deadline last October. More than half those applicants were denied, either because they didn't meet eligibility criteria or didn't provide the department with the necessary verification that they kept new jobs for the required four weeks.

The report indicates that administrative difficulties were partly to blame for the high denial rate.

"The program was established with very specific eligibility criteria, which led to some confusion and difficulty in processing applications," it says. "In addition, the speed at which the program needed to be launched necessitated the adoption of labor-intensive practices. Without automated systems for verifying employment or eligibility, the employment verification process was burdensome." 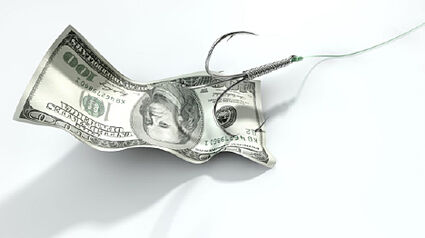 The department wrote that "lessons learned" from administering return-to-work bonuses have since been applied to streamlining the administration of other efforts.

Bonuses were paid out in 50 of Montana's 56 counties, the department said. Yellowstone County, which includes Billings, had the most at 467, followed by Missoula County with 452.

The department also said bonus recipients appeared to generally be earning more at new jobs than they had in previous positions. According to earnings reported on application materials, 60% of bonus recipients are earning at least $15 an hour, and 28% at least $20 an hour.