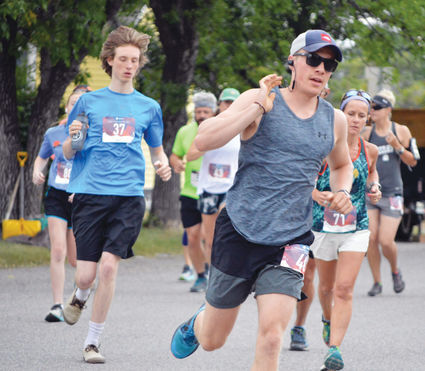 Residents of the Gallatin Valley jump at–or rather run toward–any opportunity to get active outdoors. Since the coronavirus pandemic has forced the cancellation of events such as the Headwaters Bank Run, Three Forks residents are ready to get running again.

If all goes according to plan, the Headwaters Bank Run will take place July 23 of this year with a 5k, a 10k and a half-marathon.

2022 marks a big year for the Headwaters Trail System. This year's run will commemorate 25 years since the city built the trail system.

"It will be fun to have everybody back," Gene Townsend, director of the Headwaters Trail System, and his wife Pat Townsend said during a cheerful phone interview.

While you can't register to participate, the city needs volunteers to prepare for the event. According to Healthy Gallatin, there are still 1,164 active cases in the county. The city suspects that this factor may decrease volunteer turnout.

"Many of our volunteers return to help us every year - but with COVID we have a few that are just not ready to get out there in large groups yet, so we need some new recruits!" the City of Three Forks said in a Feb. 1 Facebook post.

The Headwaters Bank Run is the main fundraiser for the Headwaters Trail System. Without the ability to host fundraisers, the trail system has relied on government grants and patron donations.

Much to the Townsends' dismay, these funds are not enough to cover all of the trail systems' expenses. Without the much needed fundraisers, the trails system must rely on the general budget alone.

This budget is not enough to cover the routine maintenance of the currently eight-mile, continuously paved pathways that make up the Headwaters Trail System. Furthermore, the trail system does not have the funds to expand the pathways any further, and Townsend has high hopes for the future of the trails system.

After the fundraiser, the Townsends' hope to connect the Headwaters Trail System with trails in Manhattan, and someday, with those in Bozeman.

The Townsend's emphasized that the Headwaters Trail System is very important to both of them. Bringing events such as this back to the Three Forks' community is clearly a priority for the couple.

Those not interested in running or walking in a race can show their support as well by volunteering their time to bring back the Headwaters Bank Run.