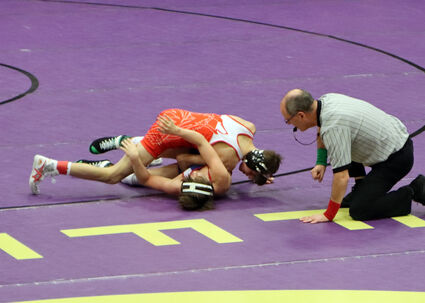 Cole Rogers at 103 and Brayden Linville at 113 had first place finishes for Three Forks.

Chase Kirkland at 126 and Dylan Kamps at 138 finished in third place. Gabe Hungerford qualified for this week's state meet in Butte with an eighth-place finish at 145.

Wolves Head Coach Nye Howey was pleased with the way his team opened the postseason.

"We have five going to state, the same number we did last year. We wrestled really well," Howey said.

"They all did a really good job," he said.

Rogers opened the tournament with a pin at the 59-second mark of his quarterfinal match against Isaac Skogen of Whitehall. Rogers pinned Traic Fainter of Big Fork (3:30) in the semifinals. Rogers picked up an 8-6 win over Nate Blodnick of Anaconda in the finals.

Rogers is excited for the opportunity to win a state title.

"I have worked hard and feel winning a state title is definitely possible this year," he said.

Linville opened with a pin (2:00) over Brody Smith of Arlee and won 4-3 over Dylan Mikesell in the semifinals. Linville won the title with an 11-4 win over Leo Anderson of Jefferson.

Kirkland went an impressive 4-1 at the tournament. He started with a pin over Orrin Hansen (:37) in the championship round and an 18-6 majority decision against Angus Anderson of Big Forks in the quarterfinals. Kirkland bounced back strong after losing in the semifinals, winning two, including a 7-5 win over Nate Wadlow of Cascade in the third-place match. 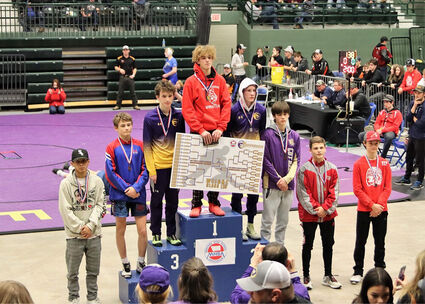 Brayden Linville was the 113 pound champion. Photo by Jenn Wagner

It was a great weekend of wrestling for Kamps, who won a total of five matches at the two-day tournament. Kamps opened the tournament with a technical fall win over Will James Courville of Plains/Hot Springs. After losing in the quarterfinals to Jefferey Colesworthy of Choteau, Kamps would win three straight to set up a rematch between the two in the third-place match.

Things were different this time, with Kamps earning a thrilling 8-7 win and the third-place finish.

After losing his first match, Hungerford had two straight wins including a win by fall (3:50) over Wyatt Elwell of Bigfork and a 6-2 win over Dominic Peltier of Eureka.

Looking towards the state tournament this week in Butte, Howey is excited to see what his team can do.

Rogers said the team put in a lot of work in the offseason, a lot of practicing, and out of state tournaments -- just to get better.

"I feel good about state and think we have a good chance placing as a team again this year," Rogers said.