Three Forks finishes 5B play at 7-3

It was an impressive week for the Three Forks High School girls basketball team. The Wolves wrapped up regular season play in the 5B Conference with a 37-31 win Thursday over Manhattan and a 58-36 home win Saturday at Townsend. They ended 5B District play with a 7-3 record and are currently in third place.

Three Forks Head Coach Mike Sauvageau said they started really good against the Tigers and had a great second half Saturday, and he just wants them to be more consistent with scoring in each quarter.

It was a strong opening half Thursday for Three Forks, who took a 26-15 lead into the break.

The Wolves were led in scoring by Jayden Woodland with nine points. Fallon Page had eight, Brianna Warren and Ashlyn Swenson finished with seven, Lily Jones had four, and Jasmyn added two points. 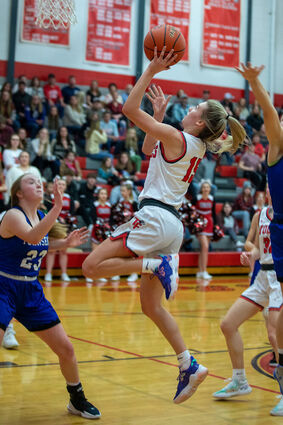 Sauvageau said the team was able to run the offense the way they wanted to in the first half.

Three Forks was led in scoring Saturday by Woodland with 20 and Swenson was also in double figures with 10. Addie Pestel and Tanaya Hauser had four, Warren and Jones finished with three, and Murphy and Brielle Davis had two. Sauvageau said the girls that needed to score did, and it was nice to see a lot of other players score.

Three Forks will wrap up the regular season with two non-conference games. The Wolves will be on the road Friday at East Helena and host Columbus in a senior night game Saturday.

Sauvageau said seniors Jones, Woodland, Swenson, and Murphy have always done everything he has asked and always showed up for open gyms and tournaments.

"They have been awesome," he said.