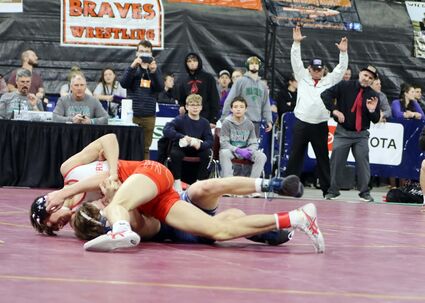 Cole Rogers works for the pin during his state championship match. Photo by Jenn Wagner

For the second straight season, the Three Forks High School finished the year in style with two Montana Class B/C State Champions.

Cole Rogers pinned all four opponents on the way to the title at 103 pounds. Sophomore Brayden Linville won his second consecutive state title, this time picking up a 113-pound championship. Junior Dylan Kamps also had an excellent weekend for the Wolves finishing in third place at 138 pounds. As a team, Three Fork finished in fifth place.

"I was super proud of both of them. It was great to see Cole get his first and Brayden get his second," he said.

Rogers was on fire throughout the tournament and opened with a championship round pin over Santiago Alonzo of Circle in 20 seconds. Rogers pinned Traic Fainter of Bigfork in the quarterfinals and the one-minute mark and won by fall in the semifinals at the :46 mark over Aiden Walkowiak.

Rogers won by fall over Nate Blodnick of Anaconda in the state finals at the 3:38 mark.

Rogers did not give up a point at state and won his four matches in 5:44.

While he excelled on the mat at state in Billings, it was a difficult journey to the postseason for Rogers, who did not practice or wrestle the three weeks leading up to the Western Divisional Tournament. He said it meant a lot to win the title.

"Knowing I could win it and then getting injured wasn't a good feeling. I was nervous before Divisionals. But all the time and hard work from before paid off," said Rogers. "After wrestling at Divisionals, I felt pretty good about state and felt pretty confident in my ability to win it."

Linville was also phenomenal throughout the tournament-opening with a pin (1:29) in the championship round over Jaren Lingle of Baker. Linville advanced to his second consecutive state finals match with a pin at 2:43 over Micah Acker of Superior in the quarterfinals and Dylan Mikesell just 36 seconds into his semifinals match.

Linville won a 6-3 decision over Jake Kuka of Glasgow in the finals.

Kamps was dominant to open the tournament picking up a pin (1:25) over Ryder Cole of CJI in the championship round and a major decision win over Weston Timberman in the quarterfinals. After falling to David Schulze in the semifinals, Kamps finished strong with a pin over Kanon Branch of Cut Bank and a 7-1 win over Bryson Bartelson of Circle in the third-place match. Howey said Kamps wrestled well throughout the tourney.

Kirkland lost a tough 12-11 decision to Langdon Smith of Shepherd in the quarterfinals. Kirkland would bounce back with a pin over John Waterbury of Plains before being eliminated in the consolation round three, losing Cameron Mikesell of Boulder.

Howey said Kirkland just missed out on advancing to the semifinals and praised him for his efforts this season. 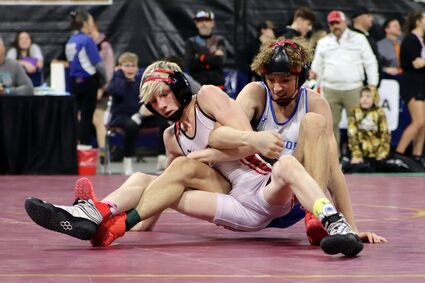 Gabe Hungerford also competed for the Wolves at 145 pounds and was eliminated after losing Shawn Gilkerson of Malta.

Howey said Hungerford got really sick after the Divisional Tournament, and he was super proud of him for even making it onto the mat in Billings

After two top-five consecutive finishes at state, Howey said Three Forks wrestling had come a long way, and they are not done with their ascent to the top of the state.

Three Forks will return all five state wrestlers next year and return 2019 and 2020 state qualifier Levi Wagner who missed this year due to an injury. Howey is also very excited to have seven more wrestlers return. Howey said it would be really good to have Jesse Eide, Jace Ashley, Jack Hayder, Logan Douma, Bruno Ferreyra, and Eriksson.

Howey added there would also be some good young wrestlers coming into the program.