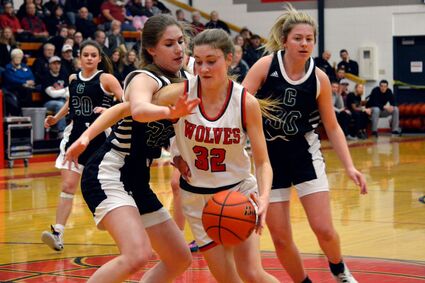 Facing a 17 point third-quarter deficit last Saturday in their regular-season finale against Columbus, the Three Forks High girls basketball responded emphatically. After cutting the lead to ten (37-27) going into the fourth quarter, the Wolves would inch even closer after two Ashlyn Swenson three-pointers made it a 39-33 game midway through the final quarter.

After forcing a Cougar turnover, Jayden Woodland barely missed a three-pointer that would have cut the lead to three. While Columbus would respond with a run of their own and a 47-36 victory, Wolves Head Coach Mike Sauvageau was pleased with the fight from his team.

"I'm happy for the effort they gave. If we hit that three, we are down three. We fought back, but you have to give Columbus credit. They had eight three-pointers by five different people. They had us on our heels a little bit, but I liked our second half and our intensity. We made it a game," he said.

Swenson led the team in scoring with 14 points. Jasmyn Murphy had nine, Woodland finished with five, Tanaya Hauser and Bella Jones had three, and Brianna Warren finished with two points.

Three Forks opened the week Friday with a 45-32 win at Class A East Helena. Leading 33-30 going into the final quarter, the Wolves closed strong, outscoring the Vigilantes 12-3 in the final frame.

Woodland had a game-high 19, Murphy and Swenson had eight, Hauser finished with six, and Fallon Page and Davis had two.

Three Forks will now move to postseason play and open the 5B District Thursday in Belgrade with a matchup against Whitehall. The third-seeded Wolves and sixth-seeded Trojans are set to tipoff at 7:30.

Sauvageau said his team needs to be more consistent with their scoring but likes the way the defensive unit has been playing.

"They have kept us in a lot of games," Sauvageau said.