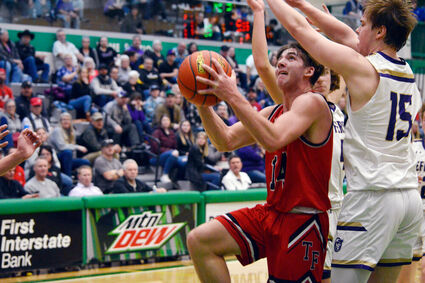 Just moments after a 60-57 semifinal loss Friday at the 5B District Tournament against Jefferson High School, Three Forks High School boys basketball Head Coach Terry Hauser said his team had to find a way to win two games Saturday to continue their season.

The number-one seeded Wolves did just that, picking up a 64-40 win over Whitehall in a game they trailed at halftime and a 43-36 win against Townsend in a game where the Bulldogs stalled on offense after taking an early lead.

After finishing third, Three Forks will now move on to a Southern B Divisional Tournament Play-in game scheduled for March 2 at 6 p.m. at the MetraPark Arena in Billings. The winner of the game will move on to the double-elimination and a March 3 matchup against the top seed from 4B, Columbus.

"For us to come back in the other side of the bracket is almost better than winning the tournament. Obviously, you want to hoist that trophy, but when the target is on your back and what we did with a Whitehall team that played really good in the first half and put us on our heels, and keeping our composure with a team stalling, I am so proud of them," Hauser said.

It was a low-scoring first half against the Bulldogs, with Three Forks taking a 15-14 lead into halftime. Townsend would continue to hold the ball for long stretches on offense in the third, but the Wolves were able to take a 25-22 lead going into the fourth after an Owen Long three with under a minute left.

It was a huge night for Long, who had a game-high 20 points. Mikey O'Dell added eight, Austin Allen finished with seven, Finn Tesoro had six, and Shane Williams added two points.

Trailing 29-25 at half early in the day against Whitehall, Three Forks would outscore the Trojans 39-11 in the second half.

Long had another big game with 22, Jacob Buchignani was also in double figures with 12, Tesoro had 11, Williams had six, Walker Page and Collins Stone finished with four, O'Dell added three, and Allen had two.

Looking towards the Southern B Divisional Tournament, Hauser said his team should not have to worry about teams stalling against them.

It was a tough start to the game for Three Forks, who trailed 7-0 early in the first. The Wolves would battle back, outscoring Jefferson 15-8 the remainder of the quarter to send the two teams tied at 15 going into the second. 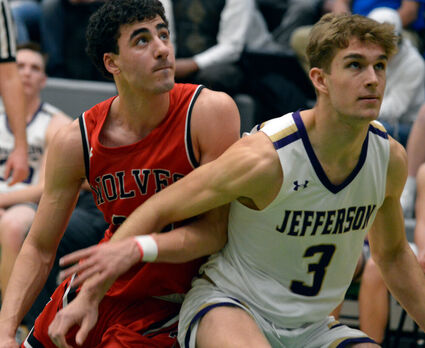 Mikey O'Dell and Jefferson's Tom Meyer battle it out for a rebound. The Wolves finished in third place and will play Colstrip in a play-in March 2 at the Southern B Divisional tourney in Billings. Voice Photo by Melissa Jenkins

Three Forks came out strong in the second quarter scoring six straight to take a 21-15 lead. The Wolves would build their biggest lead of the first half with a 9-0 run capped by an O'Dell layup to put them up 34-22 and led 37-27 at halftime.

The Panthers would storm back in the third quarter, outscoring the Wolves 17-8 to cut the lead to 46-45 going into the final quarter.

Three Forks would go up 54-51 midway through the third but could not shake off the Panthers, who rallied back for the three-point win.

Allen had a huge night for Three Forks with 15 points and 10 rebounds.

Buchignani had 13, and O'Dell was also in double figures with 12. Williams finished with seven, Tesoro had five, Long had three, and Page added two.

Hauser said his team got flat once they got a double-digit win, and Jefferson had guys step up and hit tough shots all night.

"It was not a good time to not play well," he said.