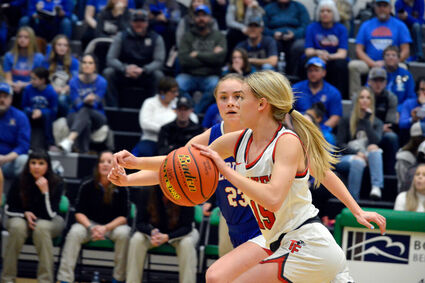 Jayden Woodland gets by her defender in action at last week's 5B District Tournament in Belgrade. Voice photo by Melissa Jenkins

The Three Forks High School girls basketball teams season came to an end after a 34-31 consolation game loss to Manhattan at the 5B District Tournament last Saturday in Belgrade.

After a 38-29 opening-round win Thursday over sixth-seeded Whitehall, third-seeded Three Forks would face elimination after a 62- 36 semifinal loss to defending state champion and second-seeded Big Timber. The Wolves responded impressively with a 46-32 win Saturday morning over Townsend and fell short of a spot at divisionals after losing to the Tigers.

Moments after the game, Head Coach Mike Sauvageau said you cannot miss free throws and layups in the minute of a game.

"They executed, and we didn't... It was a good year. It could have been a great year had we won the two games today," he said.

He also lauded the importance of the Wolves' four seniors Jayden Woodland, Ashlyn Swenson, Jasmyn Murphy, and Lily Jones, who helped the team improve from last year and ended up with 12 wins.

"They have done a lot. I have never been as happy as a group of seniors as I am with those four this year. They were truly good seniors," Sauvageau said.

It was a big first quarter against the Tigers for Woodland, who had nine for the Wolves, who took an 11-9 lead into the second.

Manhattan scored the first eight points of the first quarter and led 17-11 before Jasmyn Murphy would cut the lead to 17-12 with a free throw. Murphy would score again on a layup with 1:20 left in the half to cut it to 17-14. Neither team would score in the final minute, and the Tigers would take a three-point lead into the break.

Three Forks would take their first lead of the second half with 2:31 left in the third quarter on a layup from Jones. Manhattan would score the next three, and the Wolves would trail 24-23 going into the final quarter.

Trailing 28-25, Woodland and Swenson would hit consecutive three-pointers to put the Wolves up 31-28. Manhattan would storm back, scoring the next five to go up 33-31 with 15.9 seconds left. Woodland layup that would have tied it rimmed out with under five seconds to go, and the Tigers were able to connect to push the lead to 34-31 with 3.6 seconds. The Wolves were unable to get a shot off in the closing seconds.

Woodland led the team with a game-high 18. Jones had five, Swenson and Murphy finished with three, and Fallon Page added two.

Three Forks was dominant from the get-go in the game early Saturday against Townsend and led 14-4 at the end of the first quarter and 30-18 at the half.

Jones led the team with 10, Murphy had nine, Page had seven, Brianna Warren finished with six, Addie Pestel had four, Swenson and Brielle Davis finished with three, Tanaya Hauser and Woodland each had one.

After a slow start in the first two quarters and trailing 19-17 at the half, Three Forks would rebound strong in the third, outscoring the Trojans 11-0 to take a 28-19 lead into the third quarter. Whitehall would pull to within six in the fourth, but the Wolves held on for the 38-29 victory.

Woodland led the team with 14, and Swenson added eight. Jones and Davis finished with four, Page had three, and Murphy finished with two. 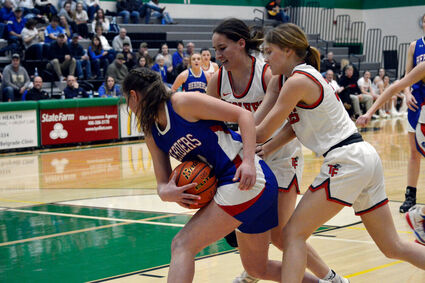 Seniors Lily Jones and Jasmyn Murphy swarm on defense at the 5B District tourney. Voice photo by Melissa Jenkins

It was a back and forth early on, and a Swenson layup as time expired put Three Forks up 10-9 at the end of the first quarter.

The Herders would come out strong in the second quarter outscoring the Wolves 17-5 to take a 26-15 halftime lead. They would continue their strong play in the third and lead 45-28 going into the final quarter.

Swenson led the team with 12, Murphy finished with eight, and Woodland had seven. Warren had three, and Pestel, Jones, and Page had two.

Sauvageau said his team did a good job in the first quarter and were able to slow down the game. He added they held the districts leading scorer Bailey Finn without a point in the first half, but several of the Big Timber starters and bench players were able to hit some big shots.

"We gave a good effort. They are just hard to guard for us," Sauvageau said.