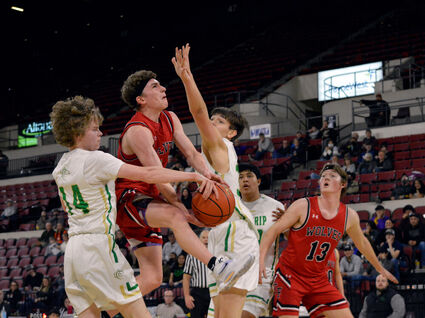 Jacob Buchignani takes it strong to the hoop in the Wednesday night win over Colstrip. Voice photo by Melissa Jenkins.

A 14-0 third-quarter run helped propel the Three Forks High School boys basketball team to a 59-41 win over Colstrip in a Wednesday night Southern B Divisional Tournament play-in game at the MetraPark Arena in Billings. With the win, the Wolves advanced to the double-elimination bracket and a matchup against 4B District champ Columbus in a game scheduled for Thursday at 5 p.m. It will be the rubber match between the two, with each team winning at home in the regular season.

After falling behind for the first time 33-31 in the third Wednesday, the Wolves would explode with the 14-0 run that featured two three-pointers from Finn Tesoro and one from Jacob Buchignani to take a 45-33 lead. Colstrip would end the run with a free throw, and the Wolves led by 11 going into the final quarter.

Three Forks Head Coach Terry Hauser said he was a little nervous when Colstrip opened the third quarter with a run but was happy with the way his team responded.

“We bit down, we're able to hit a couple of jumpers, and got a couple of stops. We played a good game, we just missed a lot of opportunities in the first half, but we held them to 22 points in the half, which was great,” Hauser said.

The Wolves would continue their hot play in the fourth, including a monster dunk from senior Owen Long and more deadly shooting from Tesoro.

Hauser praised the way his team moved the ball in the second half.

“It was all about sharing the ball and making them defend us," he said.

Long led the team with 21, Tesoro had 19, and Buchignani was also in double figures with 10. Austin Allen finished with five, and Mikey O’Dell and Shane Williams each had two.

Hauser is excited for the opportunity Thursday against Columbus. 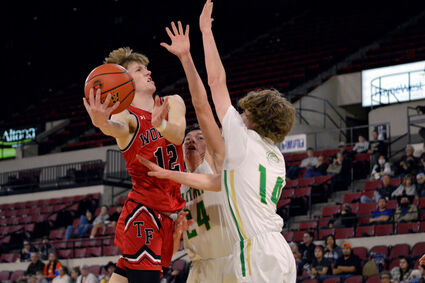 Owen Long had a monster night for the Wolves. Voice photo by Melissa Jenkins

It was a strong first quarter for Three Forks, who scored the first points of the game on a Tesoro three-pointer and would push the lead to 10 after a Long three to make it 16-6 with under a minute left. Colstrip would score the quarter’s final points, and the Wolves led 16-8 at the end of the first.

The Colts would storm back in the second, cutting the lead to 24-22 with under two minutes left in the half. Buchignani would answer right back for the Wolves, and his three-pointer made it a 27-22 game with 1:21 left in the second quarter. Neither team would score in the final minute, and Three Forks would take the five-point lead at halftime.