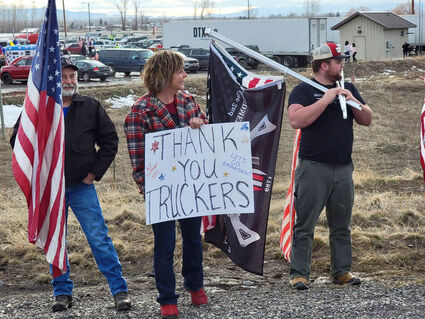 There was a huge turnout in the Gallatin Valley to support the People's Convoy. Photo by Andrea Schellenberg.

Residents of the Gallatin Valley and law enforcement officials welcomed the western group of the People's Convoy–dubbed the Montana Freedom Convoy by many–that passed through the area on March 2.

The People's Convoy, a trucker-led rally inspired by the January 2022 Canadian Freedom Convoy, announced its plans for a cross-country trek on Feb. 23. The main convoy would start in Southern California and finish their journey in Washington, D.C.

"The People's Convoy is a non-partisan, trucker-led effort supported by a cross-cultural and multi-faith contingent of supporters. ... The convoy is being assisted by retired military personnel and security experts, who are spearheading logistics in order to ensure a 100% safe, lawful, and peaceful journey," the convoy's Feb. 20 press release read.

Like the Canadian Freedom Convoy, the main motivation of the People's Convoy is protesting government-mandated COVID-19 vaccines as well as advocating for the restoration of the United States Constitution.

Within a matter of days, truckers and passenger cars from all over the country departed to join the People's Convoy, many of them forming their own convoy groups.

On the afternoon of March 1, the western group saddled up their semis in Seattle, Washington, and prepared for a long but rewarding journey. The route this band of activists planned to take had them scheduled to pass through the Gallatin Valley the next day.

As one can imagine, it takes plenty of volunteers to organize a movement as massive as this. Kelly Farris, the Bozeman convoy coordinator, jumped at the opportunity to help coordinate the group's travels through the Gallatin Valley. Why? Because no one else had, she said.

Farris anticipated the arrival of at least 300 semi-trucks and passenger vehicles on March 2; however, as the convoy traveled, other vehicles joined, making the count difficult to estimate, she said.

The Freedom Convoy itinerary planned on arrival between 4 and 6 p.m. at the Flying J Truck Stop in Belgrade, Montana. In preparation for their appearance, supporters collected donations and hosted a rally around 3:30 p.m. that day.

Local law enforcement also made arrangements to facilitate the increased flow of traffic.

"It is anticipated that only trucks seeking services will exit at Belgrade and trucks not needing services are encouraged to continue east on I-90," the Belgrade Police Department said in a March 2 Facebook post. "We ask citizens to take this into consideration if when selecting a place to view the convoy."

Although an audience of around 800 people gathered early in the afternoon, the convoy ran several hours behind schedule. Regardless, the light-hearted group of many local families waved their flags in friendship and unity.

Some people even rode their horses to the Flying J Truck Stop, showing their Montanan pride.

Around 5 p.m., dozens waved their American flags as the Freedom Convoy rolled through Deer Lodge. By 5:35 p.m., others spotted the convoy nearly 40 miles away in Butte.

As the Freedom Convoy approached Cardwell, a band of supporters cheered. One member of the group, David Reynolds, explained how he appreciated the convoy members sacrificing their time to advocate for freedom.

Not only did Reynolds, accompanied by his wife Sandy, show support, but they found it amongst the others in the audience.

"Been so much negativity over the past few years," Reynolds said. "Talking to the other folks there gave us the feeling that we were not alone."

Reynolds also felt strongly about the message that the convoy promoted.

"[The] trucking industry holds a large amount of influence," Reynolds said. "A one week stop on deliveries would bring this country to a standstill. I truly believe that a message is being sent by not just the truckers but [by] a lot of American people who are just plain fed up with everything."

At sunset, the temperature began to drop, sending some onlookers in the Belgrade area home, Andrea Schellenberg said.

Schellenberg lives in Toston, but chose to view the Freedom Convoy in Belgrade to help contest government mandated vaccinations.

"Personally, I am vaccinated, because I chose to be at the beginning. But I find it disheartening that so many areas mandate their workers to be vaccinated," Schellenberg said. "In Montana, we have more freedoms, and for that I am very thankful. But it's not that way in every state, and that concerns me."

At 6:45, the Freedom Convoy passed through Three Forks and into Belgrade. Schellenberg estimated that 500 people remained to see the 30 or so trucks roll into the truck stop while the rest of the convoy kept moving.

Though the long day of driving neared its end, the truckers still had 157 miles left to travel before they reached the Pilot Dealer Town Pump in Billings, where they rested for the night.

In Billings, more people gathered to support the Freedom Convoy. Robin DeBruycker helped prepare and serve 50 breakfast burritos to the drivers as they left the Pilot on March 3.

DeBruycker said she felt love, joy, pride, and excitement as she walked into the Billings Rally.

"I'm out here fighting for our truckers, for freedom and for our children's children," DeBruycker said.

The western Freedom Convoy group rendezvoused with the I-94 team at Loves Truck in Oakdale, Wisconsin on March 4.On March 5, all the convoys gathered together at the Hagerstown Speedway in Maryland. Here they heard from various speakers and prepared to reach their final destination. Some convoy participants estimated the combined convoys to be 10 miles long. 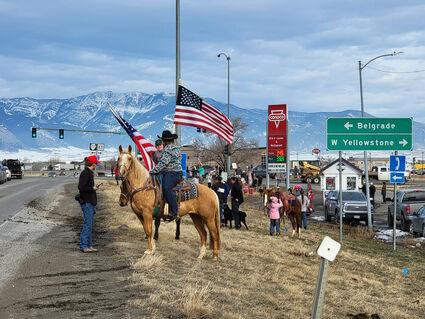 On March 6, the People's Convoy finished their cross-country movement by driving the beltway around Washington, D.C. The group did not travel through D.C. proper due to logistical issues.

"This freedom-loving movement is about the journey, not the destination," the People's Convoy website reads.

All along the road, the convoys received support both in-person and online. However, some opponents claimed that the movement wasted valuable resources.

To those people, Reynolds said it is no different than using resources for a personal vacation or purchasing a self-indulging item. For Reynolds, the truckers and passenger vehicles used resources for a better cause.

"[The] fight for freedom is priceless," Reynolds said.