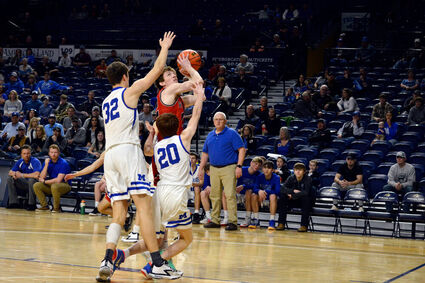 With a dramatic 56-54 overtime win Thursday afternoon over Malta at the state tournament, the Three Forks High School boys basketball team is headed to the semifinals.

Three Forks will face Big Fork in the semifinals in a game scheduled for 6:30 p.m. at the Brick Breeden Fieldhouse in Bozeman.

Moments after the victory, Wolves Head Coach Terry Hauser said it feels amazing to be moving on at state.

"Malta is a good team, and it was a tough matchup. They hit some big shots, but I am super proud of our kids for holding their composure the whole game. Doing that is not easy, and here we are going to the semifinals," Hauser said.

Three Forks was led in scoring by Owen Long, who finished with a game-high 16. Finn Tesoro added 15, Jacob Buchignani finished with 13, Austin Allen had eight, and Mikey O'Dell had four points.

Tied at 51 at the end of regulation, it was a low-scoring overtime period with Three Forks outscoring the Mustangs 5-3. After a Buchignani free throw put the Wolves up 56-54, Three Forks clamped down on defense, and two Malta shots fell short in the final seconds.

O'Dell said the emotions throughout the game were pretty high.

"I'm really proud. It was good we got the win. The semis are going to be fun. I really can't wait. We've been planning for this the whole year," he said.

Three Forks was strong from the tip and would lead by eight twice before eventually taking a 17-12 lead into the second quarter.

The Mustangs would storm back in the second, tying the game at 25 late in the half. A ferocious Owen Long dunk was the last two points of the second quarter, and the Wolves led 27-25 at halftime.

Three Forks impressively started the third and would build as big as a seven-point lead before Malta battled back to pull to within 43-41 going into the final quarter.

The Wolves were able to tie the game at 51 with an Owen Long shot with one minute left. Both teams would each miss a shot in the final minute, and the game would head to overtime tied at 51.