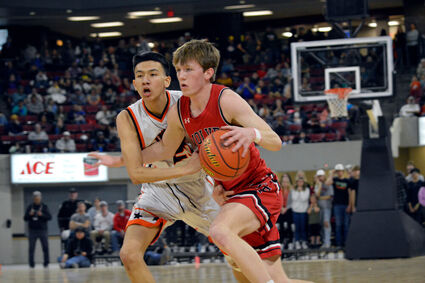 Owen Long gets by his defender in a finals matchup against Lodge Grass. Voice photo by Melissa Jenkins

The Three Forks High School boys basketball team is headed to the state tournament this week at the Brick Breeden Field House in Bozeman. The Wolves will open with a quarterfinal matchup Thursday at noon against Malta.

Three Forks qualified for the state tournament with a second-place finish at last week's Southern B Divisional Tournament at the MetraPark in Billings. After a workmanlike 59-41 play-in game victory Wednesday over Colstrip, Three Forks advanced to the semifinals with a dramatic 66-61 overtime win over Columbus. The Wolves advanced to the finals after an 81-55 dismantling of Lame Deer.

Three Forks trailed the Indians in the finals 23-13 at the end of the first, and Head Coach Terry Hauser said his team had a tough time figuring them out a first but they just kept battling.

The Wolves would pull to within 28-26 on a Finn Tesoro three-pointer before Lodge Grass would go on a huge run to take a 42-28 lead. Three Forks would battle back to cut the lead to 44-37 going into the half.

The Wolves would tie it twice in the final half and, trailing 68-66 with .7 seconds left in the game, had a chance to win on an Owen Long three-point attempt as time expired.

Senior Mikey O'Dell led the team in scoring with 20, Long had 14, Tesoro added 13, and Jacob Buchignani was also in double figures with 11. Austin Allen and Shane Williams added four points.

"I am so proud of them. They just kept fighting. Lodge Grass is a great team, and they have played like eight games at the Metra. We played them on a floor they are used to, and we were right there with them. They've won two straight state championships for a reason. Hopefully, we get a chance at them next week," Hauser.

With state this week and a rematch of a game the Wolves won earlier in the season against Malta, Hauser said his team has got to move on.

"We are still going to the Brick Breeden Field House. I'm so excited to play in Bozeman 30 minutes from home. We will get back to the drawing board, figure out a game plan, and go from there," he said.

It was a back and forth battle in the quarterfinals, with Columbus leading 22-15 at the end of the first and the Wolves storming back to take a 29-27 halftime lead. Trailing 42-35 at the end of the third, Three Forks battled back and would tie the game at 53 on a Buchignani three-pointer. The Wolves outscored Columbus 13-8 in the extra period to take home the 66-61 victory.

Buchignani had a huge night leading the team with 17. Long had 14, Tesoro finished with 12, Allen and O'Dell had nine, and Williams added five.

Three Forks was dominant from the get-go in the semifinals against Lame Deer leading 26-12 at the end of the first quarter and 52-25 at half of the 81-55 victory. Tesoro led the team with 26, O'Dell had 18, Buchignani finished with 13, Long had 10, Allen finished with seven, Rylan Koch had three, and Collin Stone and Williams finished with two.

After falling behind for the first time 33-31 in the third Wednesday, the Wolves would explode with the 14-0 run that featured two three-pointers from Tesoro and one from Buchignani to take a 45-33 lead. Colstrip would end the run with a free throw, and the Wolves led by 11 going into the final quarter. 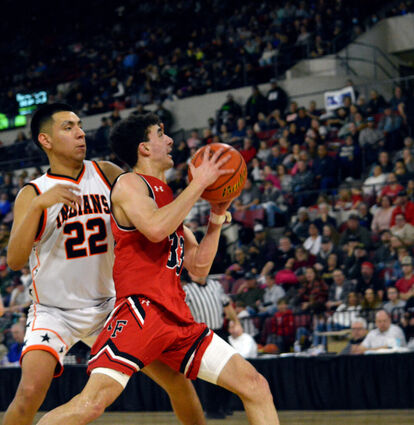 Mikey O'Dell takes it to the basket against Lodge Grass. Voice photo by Melissa Jenkins

Hauser said he was a little nervous when Colstrip opened the third quarter with a run but was happy with the way his team responded.

"We bit down, we're able to hit a couple of jumpers, and got a couple of stops. We played a good game, we just missed a lot of opportunities in the first half, but we held them to 22 points in the half, which was great," Hauser said.

The Wolves would continue their hot play in the fourth, including a monster dunk from senior Long and more deadly shooting from Tesoro.

Hauser praised the way his team moved the ball in the second half.

"It was all about sharing the ball and making them defend us," he said.

Long led the team with 21, Tesoro had 19, and Buchignani was also in double figures with 10. Allen finished with five, and O'Dell and Williams each had two.