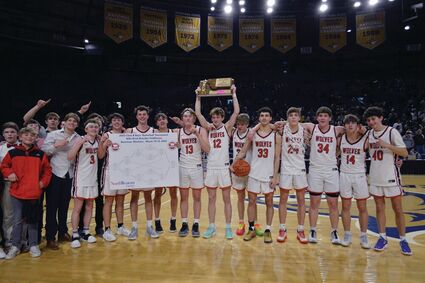 The Wolves led from start to finish and captured the title with a 72-57 win Saturday night over Harlem at the Brick Breeden Fieldhouse in Bozeman.

Three Forks (23-5) had advanced to the finals with a 56-54 overtime win Thursday over Malta and a 65-54 semifinal win Friday over Bigfork.

"I don't know if it has even set in right now, but it feels good. I'm just so proud of the kids. They battled and battled. They are coachable, they are selfless, and everything we practiced all year long, they brought it at the right time," said Hauser.

"I can't even put words to it. It is so much relief and so much excitement. We have worked for this for this for four years. The players that came before, they almost had a title, and I've been to the state tournament three times, and we were so close. To get it done is just amazing," Allen said.

It was a back-and-forth battle in the first quarter with Three Forks jumping out to a 14-3 lead before Harlem came roaring back cutting it to as close as 14-12. An Owen Long jumper at the buzzer put the Wolves up 19-14 going into the second. It was a big opening quarter for Finn Tesoro with 11 points.

Three Forks would outscore the Wildcats by two in the second quarter and led 34-27 going into halftime.

The Wolves would build as big as a 43-29 lead on a Jacob Buchignani three midway through the quarter before Harlem cut the lead to 48-41 going into the final quarter.

The Wildcats would pull no closer than five in the fourth quarter before the Wolves sealed the game in the final few minutes at the free throw line.

It was a huge night for Tesoro who led the team with a game-high 28 points including 12 of 15 from the charity stripe. Long had a big game for 16, and Buchignani was also in double figures with 12. Allen finished with seven, Mikey O'Dell finished with five, and Shane Williams and Rylan Koch each finished with two.

The Wolves shot 59 percent from the field including eight of ten in the first quarter.

Buchignani said it was amazing to come home with the title.

"We have put in countless hours and had countless open gyms; it is just an incredible feeling. We've just stuck with each other, trusted and had faith in each other, and had each other's backs. It was a team effort all around," he said.

Hauser also praised the large contingent of Wolves fans in the arena.

"There are not many crowds better then Three Forks. The community support has been so amazing. It is why kids want to play at Three Forks. We are a family, everybody loves one another, and everybody cares about one another. I'm very blessed to live where I do. I've been here 25 years and I can't thank God enough," he said.

Three forks used a 14-0 second half run to propel them to the 65-54 semifinal win Friday night over Bigfork. The Wolves had three players in double figures Friday, with O'Dell leading the way with a game-high 19 points. Tesoro had 16, and Long was also in double figures with 15. Allen finished with nine points and Williams added six.

Moments after the victory, Hauser said it feels amazing to be moving on at state.

"Malta is a good team, and it was a tough matchup. They hit some big shots, but I am super proud of our kids for holding their composure the whole game. Doing that is not easy, and here we are going to the semifinals," Hauser said.

Three Forks was led in scoring by Long, who finished with a game-high 16. Tesoro added 15, Buchignani finished with 13, Allen had eight, and O'Dell had four points.

Tied at 51 at the end of regulation, it was a low-scoring overtime period with Three Forks outscoring the Mustangs 5-3. After a Buchignani free throw put the Wolves up 56-54, Three Forks clamped down on defense, and two Malta shots fell short in the final seconds.

O'Dell said the emotions throughout the game were high. 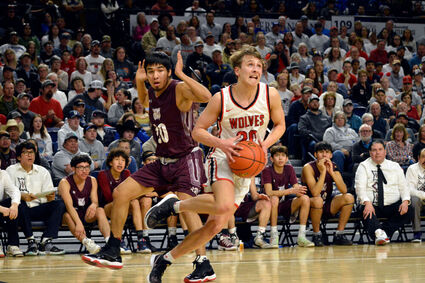 Finn Tesoro had huge night in the finals with a game-high 28 points.

"I'm really proud. It was good we got the win. The semis are going to be fun. I really can't wait. We've been planning for this the whole year," Hauser said.

Three Forks was strong from the tip and would lead by eight twice before eventually taking a 17-12 lead into the second quarter.

The Mustangs would storm back in the second, tying the game at 25 late in the half. A ferocious Owen Long dunk was the last two points of the second quarter, and the Wolves led 27-25 at halftime.

Three Forks impressively started the third and would build as big as a six-point lead before Malta battled back to pull to within 43-41 going into the final quarter.

The Wolves were able to tie the game at 51 with an Owen Long shot with one minute left. Both teams would each miss a shot in the final minute, and the game would head to overtime tied at 51.