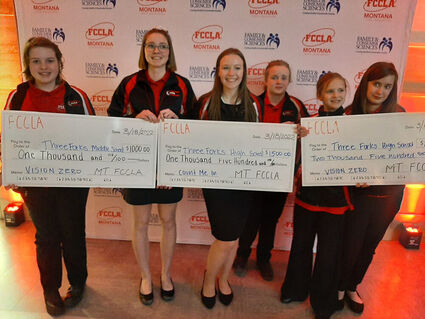 At the 75th FCCLA Montana Leadership Conference held on the MSU campus March 17th and 18th.   The Three Forks High School Traffic Safety Team received first place and $2500 award for their project, Slow Your Roll. They worked to organize cone week to educate their peers about traffic safety in a variety of ways.  Three Forks Middle School received an Honorable Mention and $1000 for their Project Walk Like a Wolf project. Their project focused on teaching Three Forks Elementary students how to safely cross the street. They painted red and white paw prints in the cross walks to draw attention to the crosswalks.  The awards are part of a program sponsored by the Montana Department of Transportation, Montana FCCLA and Ford Driving Skills for Life. Schools from across Montana received funding in October to carry out their individual traffic safety projects, each school submitted a report at the conclusion of the project and awards were announced at the FCCLA State Leadership Conference this past week in Bozeman. 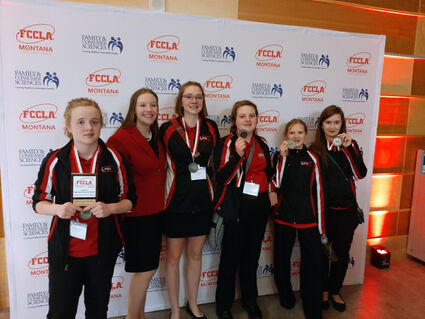 Carey Hansen received second place from the Count Me In project for her project to educate fifth graders in Three Forks about saving, spending and investing money. She worked with fifth grade teachers Katy Hansen, Jenna Fromme and Tiffany Lynch to coordinate the project. Carey received a check for $1500 from the sponsors of the Count Me In project. Sponsors include: Montana Financial Education Coalition, First Interstate BancSystem Foundation, Montana Council for Economic Education, and Reach Higher Montana. Funds received from the awards may be used for chapter programming the students of Three Forks High School and Middle School are grateful for the support of our program by the sponsors and Montana FCCLA.