The developer says contingencies are in place, project is misunderstood. 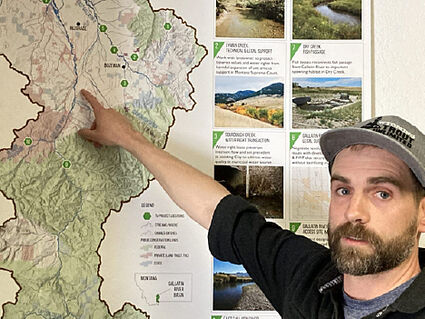 Connor Parrish of Trout Unlimited points on a map to the site of a planned glampground resort in Gallatin Gateway. Credit: Frank Eltman

One side envisions a day when covered wagons, teepees and tents featuring plush, king-sized beds will dot a bucolic landscape, where guests can end their days at a tiki bar with an appetizer and a cocktail while their children hear fireside chats about nature and the environment.

Others fear an inevitable moment when rapidly melting snow and heavy rain, or devastating ice floes, conspire to bring a flood crashing down the picturesque Gallatin River, washing away the happy glampground and spewing debris in an ecological nightmare.

The Riverbend Glamping Getaway project here has united scores of neighbors and environmental groups against a Bozeman couple, Jeff and Jirina Pfeil, who contend they have met all the legal obligations to build their glamping resort, despite the property sitting in a designated flood plain. They are moving ahead with plans to open a year from now.

The glampground, situated on a small island in Gallatin Gateway between two channels of the Gallatin River, would feature 58 sites with tents, wagons and teepees decked out with bedding and other "creature comforts" to provide a glamorous camping experience for visitors. The site would include private bathroom facilities in each tent.

Sean O'Callaghan, chief planning officer for the Gallatin County Department of Planning and Community Development who oversees permitting for projects in the county's flood plain, ruled in November that the Pfeils could go forward.

"I found after reviewing all of the information, including public comment that was within the scope of the floodplain regulations, that the project ultimately met the regulatory requirements," O'Callaghan said.

But organizations including American Rivers and Trout Unlimited and neighbors who formed an ad hoc group called Protect the Gallatin River, are appealing the approval. The Gallatin County Commission will consider some of their arguments during a meeting April 8.

"I think it's a totally sketchy project from a public health and safety standpoint, from an economic standpoint," said Scott Bosse, Northern Rockies director for American Rivers. "I just don't think there's going to be a demand by well-heeled tourists to spend hundreds of dollars a night to camp next to Gallatin Gateway. Of course those tourists have no idea about the risk of flooding in that area."

Bosse, who has lived in the Bozeman area for nearly two decades, insists that building in a floodplain "is like pitching a tent on the interstate when cars aren't coming. It looks safe for now, but are you going to move your tent every time a car or truck comes down the interstate?

"We all know it's a really bad idea, but there's kind of a loophole in our floodplain regs. There's no explicit prohibition on building a glampground in a floodplain or a floodway."

Jeff Pfeil, who owned Bozeman Tree, Lawn and Pest for 22 years until selling the business in December to focus on the glamping project, counters that he will be able to relocate the Conestoga wagons, teepees and tents in plenty of time to avoid a disaster should the waters start to rise. He estimates he likely would have at least 24 hours and as much as 72 hours to clear out - a claim his opponents dispute.

Pfeil said he developed an evacuation plan with a consulting firm and believes, "This whole situation can be evacuated in less than a few hours."

The last major flooding in the area took place in 2014, both sides said.

"We were really excited to bring this project to Gateway, and we were really surprised to find that the residents in Gateway, and there were some nonprofits, don't see the value that it could bring to the community, not only from a helping people connect with nature perspective but also just from an economic perspective," Pfeil said.

Peggy Lehman and her husband, Gordon, own 56 acres of undeveloped land adjacent to the planned glampground and have lived on Axtell Gateway Road since 1981.

"I'm against the glampground, period," she said on a recent Saturday morning walk through her property with neighbor Kris Kruid, a fellow member of the Save the Gallatin River group.

She is concerned that either ice jams or heavy rainfall at the wrong time will create flooding and everything will get swept downstream into their property.

"There's nobody that likes it," she said of the glampground.

Kruid said allowing the project in a floodplain should be a nonstarter.

"So all these people will be trapped here along with their Conestoga wagons and tents and dishes and chairs," she said, "and the guy is supposed to be able to remove all of that stuff in the event of a flood, but that's only if you have enough time to see it coming."

Pfeil insists he's environmentally conscious, citing his background as an arborist, and feels he's being misunderstood.

"All of the things that we're talking about here are temporary accommodations," he said. We're not talking about building any structures here in the floodplain.

"Our goal is to enjoy the beauty of the river, not to harm it."

Connor Parrish of Trout Unlimited believes the project "is going to happen," despite the regulatory wrangling.

"I don't feel that any development should happen in a floodplain," Parrish said. "But the way that the rules are laid out is that you are able to build in the floodplain as long as the structures aren't permanent, and that's how they are getting around being able to do this project."

His organization is backing a plan to allow the glampground, but only from July to November, when there is less chance of flooding.

"This is Montana, this is trout central right here, and so the smartest thing to do is to remove those things seasonally."

Parrish fears there will be an economic price to pay if the river is imperiled.

"It's almost a billion dollars that comes into the state for fishing, and a lot of that gets spent right here in southwestern Montana because the fisheries are so great," he said. "If you spend any amount of time at the airport you will see the number of people coming off planes with fly rods in their hands."

"That's the group that I have a huge amount of respect for there," he said of Trout Unlimited. "I do respect them and their thoughts and I can understand why they made that request, but they have not really analyzed the site fully." 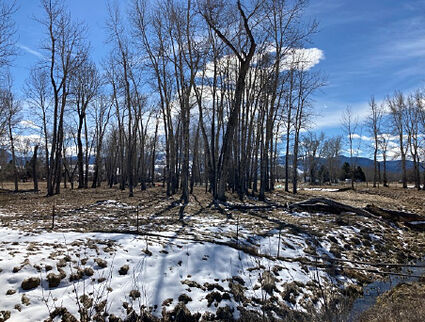 Lehman, who insists she supports glampgrounds, just not in a floodplain, appears ready for a court battle if county regulators allow Pfeil to move ahead.

"Mother Nature is so unpredictable, and anybody that's been reading the news anywhere knows this. I mean that's why they came up with the floodplain regulations, because so many disasters happen from development by people who said, `Oh that will never happen to me.'"

For his part, Pfeil says he and his wife are committed to "seeing this through to the absolute end. What we've realized is the majority of their concerns are because they haven't closely and carefully really looked at what we have proposed.

"All I need is the opportunity to show folks, and it's going to be a completely different reception and perception of this project."

This article was originally published at http://www.montanafreepress.org