There were plenty of positives in the two opening meets for the Three Forks High School Track and Field Team.

The Wolves opened the season on March 31 in Columbus and would compete again on Saturday at the Class B Kickoff in Lockwood.

According to Head Coach Tracy Welter, a big highlight from the opener in Columbus was Jasmyn Murphy finishing first and auto-qualifying for state in the long jump. Murphy also won the 400 meters and was fourth in the 800 meters. Welter noted other highlights were Jayden Woodland winning the 3200 meters, and Morgan Carr winning the discus.

On the boys' side, Garrett Golding was sixth in the 100 meters, Bryon Fanning was third in the 3200 meters, and Beau Johnston was fourth in the 3200. Lucas Roberts finished seventh in the javelin, and Dawson Frisinger was 10th in the triple jump. 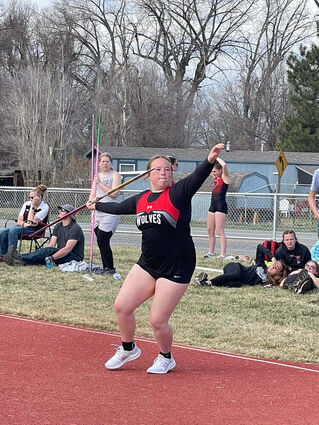 Kylie Rowan had a great start to the season.

Murphy was strong again in Lockwood, finishing second in the 200, long jump, and 300 hurdles.

Three Forks will next compete Saturday at the Townsend Meet in East Helena.