Below normal snowfall in March 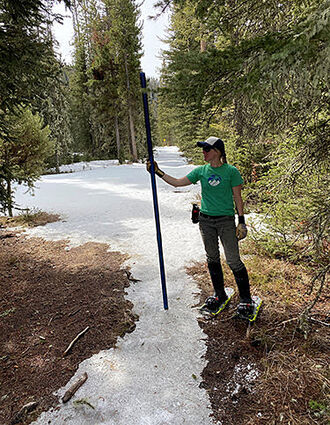 March did not bring a much-needed shift to active weather patterns that would have benefited other mountain snowpack. March precipitation was well below normal across most of Montana. As a result, most snowpack percentages decreased for the third consecutive month.

"Most of the state has been in a prolonged dry period since mid-January and many stations, particularly in southwest Montana, have recorded record low precipitation since then," said USDA Natural Resources Conservation Service (NRCS) Hydrologist Eric Larson.

Northwest Montana and the northern Rocky Mountain Front were exceptions and received near to above normal March precipitation. Much of that precipitation arrived during the first week of the month and due to unseasonably warm temperatures fell as rain at all but the highest elevations.

The current statewide snowpack is below normal in all but northwest Montana and the northern Rocky Mountain Front. "Thankfully December brought abundant precipitation because it basically built most of this season's snowpack," said Larson. Several SNOTEL sites maintained by NRCS across Montana had more snowfall in December alone than mid-January through now. While a snowy March was needed, it instead brought some sunny days, warmer than normal temperatures, and in some locations rain on snow, which consequently drove the mid-to-low elevation snowpack into an early and rapid melt. Most SNOTEL sites at all elevations have not reached their normal peak snowpack levels and the probability is low that the snowpack in those locations will fully recover. Upper elevations across the region have not released a significant amount of water yet and will hopefully make some gains in April and May. 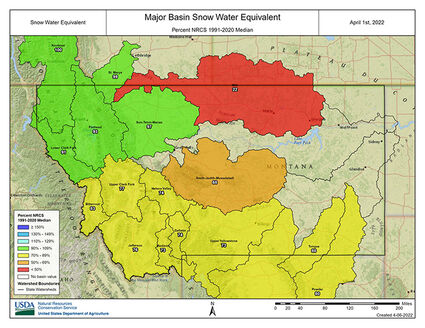 While the opportunity to add to our snowpack is diminishing, the outlook for spring and summer runoff in some areas of the state is not optimistic. The current streamflow forecasts for southwest Montana and the mainstem of the Missouri are all well below normal, ranging from below 50% of normal flows in portions of the Jefferson to about 80% on the east slope of the Beartooths. The Rocky Mountain Front and river basins west of the Continental Divide are forecasted to have near to above normal flows, except for the Upper Clark Fork region which is forecasted to be below normal. At this point in the season, the best scenario for improved streamflows will be sustained cool weather and well above normal spring precipitation. However, the National Oceanic and Atmospheric Administration's Climate Prediction Center is not predicting a strong chance for either.

A full report of conditions on April 1 can be found in the monthly Water Supply Outlook Report available on the Montana Snow Survey website. In addition, real-time snow survey data can be found at http://www.mt.nrcs.usda.gov under Snow Survey.